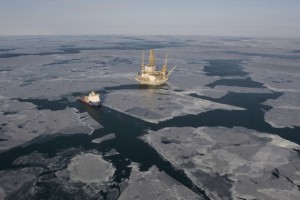 There was grim news over the weekend for those fighting Arctic drilling as the Russian energy giant Rosneft announced that it had struck oil in the world’s most northerly well, deep in the Arctic.

The $700 million well, which ironically Rosneft is calling called Pobeda, the Russian for  “Victory”, could contain about one billion barrels of oil.

The results of the drilling are being closely watched by many in the oil industry who see the region as its last great hope for lucrative reserves – as well as environmentalists who are equally appalled that the Arctic could be opened up for oil drilling.

The discovery of the well, some 250km off the north coast of Russia in the Kara Sea, was made jointly with Exxon Mobil, which will now have to pull out of the project due to American sanctions over Russia due to the conflict in Ukraine.

Igor Sechin, the CEO of Rosneft, who is the most powerful man in the Russian oil industry and a close confidant of President Vladimir Putin, is being bullish about the prospects of the well with or without Exxon.

“We will continue working no matter what,” Sechin said in an interview to Bloomberg. “We will plan the work for next season.” He also said Rosneft was planning 30 or more Arctic wells.

Sechin said the results of initial testing were really positive, after the well had been completed in near-record time. This discovery is of “exceptional significance in showing the presence of hydrocarbons in the Arctic.”

“It is an astonishing sample of light oil, which based on the results of the analysis performed, is comparable to the Siberian Light oil,” he continued.

Sechin went on to add that “This is our united victory, it was achieved thanks to our friends and partners from ExxonMobil, Nord Atlantic Drilling, Schlumberger, Halliburton, Weatherford, Baker, Trendsetter, FMC.”

But many commentators believe it will not be that simple to proceed: according to Bloomberg Sechin has a real problem. The well was dependent on money and expertise from Exxon, which is now forbidden to carry on working in the Russian Arctic after the well is sealed.

Indeed Exxon is being far more circumspect about the well’s prospects. “We have encountered hydrocarbons, but it is premature to speculate on any potential outcome,” said Exxon spokesman Richard Keil. “Our current focus is on completing the well and safely winding down operations consistent with our license with the U.S. government.”

The lack of Exxon’s hard cash and Exxon’s expertise could indeed be a stumbling block with one investment bank, VTB Capital arguing in a research note that: “We believe that to proceed with Arctic development, the company would need to drill more exploratory wells, as the stated resources are not enough, in our view, to economically justify such complicated production.”

But many western oil executives and analysts believe that Russia will not be able to proceed without US or European assistance.

Meanwhile Greenpeace condemned Rosneft’s plans: “An oil spill under these icy waters would have a catastrophic impact on one of the most pristine, unique and beautiful landscapes on earth,” it argues. “The risks of such an accident are ever present and the oil industry’s response plans remain wholly inadequate.”