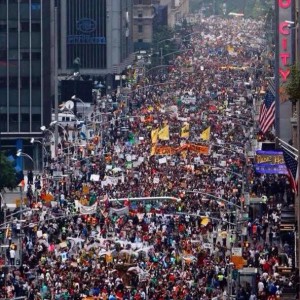 In all in excess of 570,000 people marched for the climate yesterday. We have never seen a day like it and the message was simple: An unprecedented demand by people from across the globe for urgent action on climate change.

By far the biggest event was of course in New York where the main People’s Climate March took place before the crunch UN climate talks taking place in the city tomorrow.

Hundreds of thousands marched together in solidarity having come from across all regions of the US, from Hurricane Sandy survivors carrying placards of sunflowers to those fighting fracking in their backyards. There were first time protestors to seasoned campaigners.

The numbers do not do justice to the personal stories of resistance against the fossil fuel industry. They were joined by activists fighting their own battles against fossil fuels whether the tar sands in Canada or the Amazon. All were united in their opposition to carrying on our fossil fuel addiction and for action on climate.

The huge human snake, made up of young and old, stretched for as far as the eye could see and was festooned with banners of all colours and shapes. The marchers carried banners such as “There Is No Planet B,” “Canadians for a Fossil Free Future”, “Jobs, Justice, Clean Energy,” “Grandmas Against Global Warming” “No More Climate Change” and “Stop Funding Fossils”. There were depictions of mother earth and dinosaurs, and a mobile ark.

The march sang and chanted and drummed its way through Manhatten from Columbus Circle to Times Square and the Far West Side. One constant chant was simple: “We want climate justice”.

There were so many people that at one stage the huge four mile march ground to a halt. The marchers whooped and cheered as they passed a dripping 3,000 pound ice sculpture near the Flatiron Building on Fifth Avenue. “I would say we are melting down the future,” said Nora Ligorano, one of the artists who made the sculpture. “It’s a comment on what we are doing to the planet.”

They were joined by luminaries such as former Vice President Al Gore, Ban Ki-moon, the head of the United Nations, who himself will preside of the UN climate meeting tomorrow. There were other celebrities such as Leonardo DiCaprio and Mark Ruffalo, the primatologist Jane Goodall, and the musician Sting as well as an array of politician, such as New York Mayor Bill de Blasio, who has just committed the city to an 80 percent reduction in greenhouse gases by 2050.

Foreign politicians were there too such as the French foreign minister Laurent Fabius who said: “People are now much more aware in all our countries of how important this topic is,” and Norway’s Environmental and Climate Minister, Tine Sundtoft, who wanted “people to tell leaders that now we have to take climate change seriously.”

The challenge for world leaders was starkly portrayed by Tony deBrum, the foreign minister of the Marshall Islands: if our fossil fuel addiction is left unchecked, the world is on course for a 4.5C temperature rise. “For us that means annihilation,” he warned.

One of the event’s organisers Avaaz, presented a petition with more than 2.1 million signatures demanding action on climate change. “It’s a testament to how powerful this movement is,” said Ricken Patel, executive director of Avaaz. “People are coming in amazing numbers.”

Sierra Club Executive Director Michael Brune added that the size of the march “shows we have power. It’s a diverse coalition. It’s broad and it’s growing in strength and it’s growing in diversity. And it’s increasingly impatient at the rate of progress.”

“Today, civil society acted at a scale that outdid even our own wildest expectations,” said May Boeve, Executive Director of 350.org, one of the main organizers. “Tomorrow, we expect our political leaders to do the same.”

One action that leaders could urgently tackle is fossil fuel subsidies. Steve Kretzmann, executive director of Oil Change International added that “the obvious next step would be for governments to stop wasting billions of taxpayer dollars to make the problem worse. ‘Stop Funding Fossils’ should be at the top of every climate leaders’ to do list.”