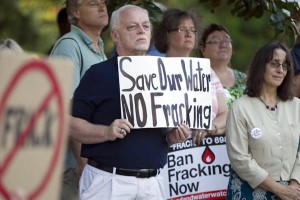 The largest ever scientific study examining the overall health of people living near fracking wells in the US is being published today and once again it sends alarm bells ringing.

The study, published in Environmental Health Perspectives, finds that people living near fracking wells are more than twice as likely to report upper respiratory and skin problems than those who live farther away.

The Yale University-led study surveyed just under 500 people from 180 randomly chosen households with ground-fed water wells in south western Pennsylvania, a hotbed of the fracking industry in the summer of 2012.

At the time there were over 600 natural gas wells in the survey area, 95% of which were being fracked. The area is part of the vast Marcellus shale.  And what they found is deeply troubling.

“The major symptoms seem to be upper-respiratory symptoms,” including “coughing … itchy eyes, nosebleeds” as well as skin problems such as rashes, itching and burning, said lead author, Dr. Peter Rabinowitz, who undertook the research whilst at the Yale School of Medicine but who has since moved to be an associate professor in the University of Washington’s School of Public Health.

Nearly 40 per cent of people living less than a kilometre from a well reported upper respiratory symptoms, compared to 18% living in the control group, over 2 kilometers away.

For people suffering from skin irritation, the situation is hardly better. Some 13% of respondents within a kilometer of a well said they had rashes and other skin symptoms, however this fell to only 3% beyond 2 kilometers.

Dr Rabinowitz, said the study “suggests there may be more health problems in people living closer to natural gas wells.”   He did also say that more research was needed to prove that the wells were causing the symptoms, although he notes that “there’s a number of possible air contaminants,” which need to be examined further.

“It’s more of an association than a causation,” Rabinowitz said. “We want to make sure people know it’s a preliminary study. … To me it strongly indicates the need to further investigate the situation and not ignore it.”