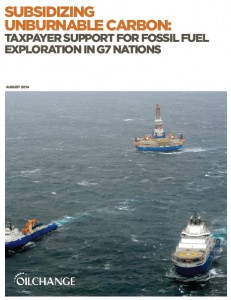 A new report by Oil Change International, Subsidizing Unburnable Carbon: Taxpayer Support for Fossil Fuel Exploration in G7 Nations, identifies billions of dollars in subsidies for fossil fuel exploration from the world’s wealthiest countries. This government support for expanding oil, gas, and coal reserves continues despite a 2009 commitment by G20 countries to phase out inefficient fossil fuel subsidies, a pledge that has been repeatedly reiterated since then, including by G7 leaders in their June 2014 declaration.

Recent statements from the Intergovernmental Panel on Climate Change (IPCC) and the International Energy Agency (IEA) affirm that at least two-thirds of proven fossil fuel reserves must stay in the ground in order to avoid the worst impacts of climate change. These reserves that cannot be burned in a climate-safe world are known as “unburnable carbon”.

Despite fossil fuel subsidy reform commitments and a clear scientific mandate, the world’s wealthiest governments continue to channel billions of dollars each year to support fossil fuel companies in their search for more unburnable carbon. Together, G7 governments provide over $8 billion in tax breaks and direct spending each year to expand oil, gas, and coal reserves, and more than an additional $10 billion in annual public finance (loans, guarantees, and equity investments) for exploration, mostly through projects overseas.

Lack of transparency in fossil fuel subsidy reporting at the national and international level poses a major obstacle to meaningful reform. The exploration subsidies identified in this report should be prioritized for immediate removal, and accountability for G20 subsidy phase-out commitments must be strengthened.