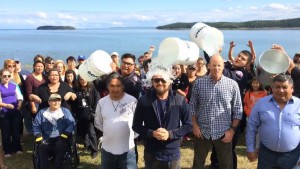 As the ALS IceBucket Challenge sweeps across many countries,  A-list actor Leonardo DiCaprio joined the craze to nominate Canadian Premier Stephen Harper to undertake the challenge. He also donated $100,000 from his Foundation on behalf of the Athabasca Chipewyan First Nation.

DiCaprio was on a tour of the tar sands region last week as he works on a documentary on the region. He was joined by Academy Award-winning Director Darren Aronofsky, maker of films such as “Black Swan,” and “Noah”.

It is unlikely that any of the challenges will be welcomed – or even accepted – by their recipients.  Harper’s press secretary was quick to retaliate that, rather than dumping a bucket of ice on his head, Canada’s Premier had already made a donation to the ALS Association.

Although DiCaprio is not the only major celebrity to visit the region – Archbishop Desmond Tutu, musician Neil Young and Oscar-winning film director James Cameron – have all visited in recent months and years, his visit is said to have “ruffled feathers” in Alberta.

Also last week DiCaprio narrated a video, entitled Carbon that depicts the fossil-fuel industry as an evil-eyed dollar-munching robotic monster stamping over the Earth. The film is produced by Green World Rising with the support of the Leonardo DiCaprio Foundation.

Depicting fossil fuels as an “ancient menace” the films says, that despite the threat of climate change, “the fossil fuel industry continues to drill that carbon out of the ground. They drill, they extract, making trillions of dollars. They frack, they mine making astronomic profits, but we need to keep this carbon in the ground.” The films goes on to make the case for a carbon tax.

It is not surprising that the oil industry and Canadian government reacted badly to DiCaprio’s visit.

“Like Canadians, we [the industry] are growing tired of the fad of celebrity environmentalists coming into the region for a few hours or a few days, and offering their ideas and solutions to developing this resource,” Lee Funke, a spokesman for the Canadian Association of Petroleum Producers, said over the weekend.

Alberta Energy Minister, Diana McQueen, came out with the usual greenwash, calling the tar sands “transparent and responsible” and said it was important to have “fact-based conversations” about energy.

The first fact the Canadians should accept is how much the carbon-intensive tar sands are contributing to climate change. Maybe they should watch “Carbon”.