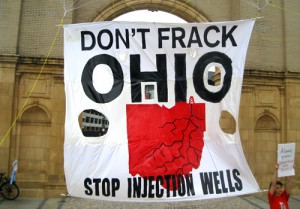 Its hotting up down in Ohio between the oil industry and locals who oppose the dumping of millions of gallons of potentially toxic waste water.

A Texas-based company, which disposes of contaminated waste water from fracking, is suing an Ohio man after he posted a series of anti-oil billboards along the local Route 36.

Buckeye Brine from Austin in Texas specialises in re-injecting the waste water from fracking that contains a potentially toxic cocktail of highly saline water, chemicals and naturally radioactive material. It is often called brine. In Ohio alone, the industry is grappling with disposing of some 16 million gallons of the wastewater a year.

As I pointed out earlier this week in a blog, there is a raging debate about the safety of fracking fluids with scientists recently publishing new research on the subject.

Last week, presenting research to the American Chemical Society, William Stringfellow from the Lawrence Berkeley National Laboratory and University of the Pacific concluded that, of the 200 commonly used compounds in fracking fluids, very little is known about the potential health risks of about one-third of the chemicals, with basically nothing known about their toxicity or physical and chemical properties.

The scientists identified eight substances, including biocides which the scientists believe raise “red flags”. These are particularly toxic to mammals. Others are toxic to marine life.

So although we have serious reasons to be concerned about fracking waste water, Buckeye Brine alleges in a lawsuit that billboards paid by Michael Boals, from eastern Ohio, contain false and defamatory information.

Neither billboard mentions Buckeye Brine by name, but one does name Rodney Adams, the company’s site supervisor for the wells and who owns the land.

The company and Rodney Adams vehemently objects to statements on two billboards along Route 36, including one that “Death may come.”

“The accusation that the wells will cause ‘death’ is a baseless and malicious attempt to damage the reputations of the plaintiffs,” the complaint contends. “The billboards are also defamatory because they state or imply that Mr. Adams and Buckeye Brine are causing ‘poisoned waters’ to enter the drinking water supply.”

In response, an unrepentant Michael Boals, a 55-year-old timber harvester, is refusing to take down the billboards, which cost $1,000.

He argues that the complaint misrepresents his statements, one of which is that injection wells “pump poisoned waters under the feet of America’s Citizens.” The second sign quotes prophecy from Revelation — on men dying from waters “made bitter.”

“I want people to think about what’s happening,” Boals says. “People don’t have a clue what an injection well is. Right now, it’s out of sight and out of mind.”

He adds: “I think a lot of people hear the word ‘injection well’ and they don’t realize they inject wastewater into the ground. I said the poisoned waters travel under the feet of all the people in the area. That’s a true statement. ‘Bitter’ speaks about something not desirable, not something you’d ever want to drink.”

Boals has now enlisted the legal help of Fair Shake Environmental Legal Services. Megan Lovett, an attorney with the group argues that fracking can correctly be considered to “destroy” and “poison” water, as the billboards argue.

It might also be difficult for Buckeye Brine to prove that re-injection is safe when very little is known about the potential health risks of about one-third of the chemicals used.