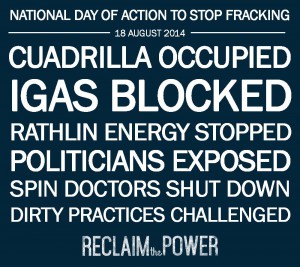 The UK had never seen a day like it. Yesterday, there were over a dozen protests against fracking across the country, from Wales to the North West, from London to Manchester.

Starting as dawn broke at 6am, activists from the anti-fracking group, Reclaim the Power, who are holding a week-long anti-fracking camp near one drilling site in the North West of the country, joined local residents and students in the Welsh town of Swansea to shut down the construction of the town’s University’s Bay Campus.

Dressed as “mad scientists”, the protestors dropped a banner and “locked on” to prevent people accessing the building. They were protesting about tens of millions of public money being poured into fracking research via the University’s new Energy Safety Research Institute.

One local resident, Jac Bastian, who joined the protest, said “If we are going to avoid dangerous climate change we need to leave unconventional gas in the ground.”

Forty-five minutes later, at 6.45am, a number of families and their children placed 88 “atoms” of Radium around the Lancashire town of Lytham as a temporary art installation to highlight concerns about radioactive discharges from the controversial technology. “I’m here with my family because we have a deep concern about the fracking process and the damage it will cause to the environment, not just now but in the years to come”, Dave Martin, a Blackpool resident and father, said:

The next target was the Government’s Department of Environment, Food and Rural Affairs (DEFRA’s) in London, which has been accused of a cover-up after heavily redacting a report on the potential impacts of shale gas exploration on rural communities.

The report, which was released under Freedom of Information, was redacted a staggering 63 times.  Sections the Government refused to disclose included the impact fracking has on house prices as well as vital rural services. One of the superglued activists said:  “What is it about the dangers of fracking that our government doesn’t want us to know?”

Leading fracking companies in the UK were also targeted with protests at iGas’s headquarters in London; Rathlin Energy in East Yorkshire; and at mid-day a group of eleven activists occupied Cuadrilla’s northern headquarters, near to where the main Reclaim the Power Action camp was taking place, and close to one of Cuadrilla’s fracking sites.

Other companies in the fracking industry’s web were also targeted such as the bankers financing the industry and the public relations companies on the front line spinning a pro-fracking line.

Early afternoon, some thirteen activists staged a “die-in” at the Blackpool branch of the HSBC bank, where they raised banners displaying the phrases “Fracker’s Bank” and “Toxic Investors”. HSBC are the biggest single UK supporter of the fossil fuel industry, helping the sector raise just under £75 billion between 2010 and 2012.

Finally the anti-fracking activists staged a protest outside of the offices of the PR company working for leading fracking companies Cuadrilla and Celtique, called the PPS Group.  Six protesters held banners displaying a range of slogans such as “PPS: It’s a Fracking Whitewash”, and “Taking The PPS”.

One of the activists Katie Roberts, argued that  “PPS are the go-to PR firm for manufacturing consent for dangerous energy developments in the UK. Fracking threatens local water, land and health, and it feeds our dependency on dirty fossil fuels. That’s why Cuadrilla needs the help of low down and dirty PR fighters like PPS to push forward toxic fracking projects in communities which don’t want them.”