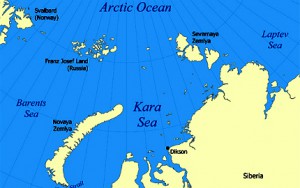 For the oil industry business comes first. After years of preparation, on Saturday ExxonMobil began drilling a $700 million well in the Kara Sea in Russia’s Arctic. It is Russia’s most northerly well.

In doing so, the oil giant has ignored growing concerns over Russia’s role in the Ukrainian conflict, and the sanctions imposed on its business partner, Rosneft, which is run by a close associate of Putin, Igor Sechin, who is also personally blacklisted.

Indeed, the goahead shows just how ineffectual the sanctions against Russia really are. Exxon’s excuse is that the contract to hire the rig was signed before sanctions were announced, but the oil giant is still working with Putin’s blacklisted inner circle.

Exxon has also ignored huge questions over whether an oil spill in the region could be contained. And of course it has totally disregarded the issue of climate change and the need to disinvest from fossil fuels in the most ecologically sensitive areas, such as the Arctic.

Not surprisingly, the start of drilling was praised by President Putin, who many people feel has blood on his hands over Ukraine. Putin sang the praises of Exxon, calling it “Russia’s old and reliable partner”.

He also labelled the joint venture as a model of “efficient international cooperation” which Russia was “open to expand”.

Putin added “businesses, including Russian and foreign companies, perfectly realise that and despite certain current political difficulties, pragmatism and common sense prevail, and we are pleased to hear that.”

Rosneft is certainly excited by the Kara Sea drilling. The well, known as Universitetskaya, is the first of as many as 40 offshore wells the Russian company plans to drill in the Arctic by 2018.

Igor Sechin calls the drilling of the Kara Sea well the “most important event of the year for the global oil and gas industry. As a result of this work we are planning to discover a new Kara sea oil province. Developing of the Arctic shelf has a huge multiplicative effect on the whole Russian economy”.

Sechin brags about the so-called vast reserves of the region arguing that “The volume of resources exceeds the oil and gas resources of the Gulf of Mexico, the Brazilian shelf, the shelf of Alaska and Canada, and it will be comparable to the resource base of Saudi Arabia”.

Exxon for its part said it was keen to carry on investing in Russia. “Our cooperation is a long-term one,” a spokesperson said. “We see big benefits here and are ready to work here with your agreement.”

Many environmentalists are outraged by Exxon’s Arctic plans. Gustavo Ampugnani, an Arctic campaigner at Greenpeace, argues that “The West Alpha platform is fast becoming the most controversial oil rig in the world. He added that Exxon and Rosneft’s plan “to drill in the ecologically sensitive Arctic is nothing less than absurd.”