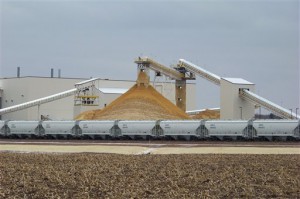 As the shale gas revolution continues a pace in North America, so does its wider environmental impact. And nowhere is that more apparent than in the burgeoning demand for frac-sand.

The demand for sand has been growing rapidly since the fracking revolution started.

“It’s huge,” said a U.S. Geological Survey mineral commodity specialist back in 2009. “I’ve never seen anything like it, the growth. It makes my head spin.”

By 2010 the value of the silica sand production had exceeded $1 billion for the first time, according to statistics from the U.S. Geological Survey.

And since then the demand has continued to rocket. According to an article in the Wall Street Journal, America’s fracking industry is expected to use nearly 100 billion pounds of sand this year. That is a staggering amount of sand.

According to the paper: “Frackers are expected to use nearly 95 billion pounds of sand this year, up nearly 30% from 2013 and up 50% from forecasts made by energy-consulting firm PacWest Consulting Partners a year ago.”

And next year the 100 billion pounds milestone will be reached.

One of the reasons for the demand for more sand is not only the numbers of wells being drilled, but also the amount of sand per well being used.  A year ago, the average well used roughly 2,500 tons of sand. Today’s wells often use double that amount, with some frackers using as much as 8,000 tons of sand.

Demand is so great it is now out-stripping supply. The best sand for fracking – called Northern White which is found in states like Wisconsin and Minnesota – is now in seriously short supply. The company which mines Northern White expects demand for its sand will be at least 25% higher than it can supply for the rest of this year.

And with the boom comes bumper profits. One frac-sand company Emerge Energy Services, which began trading just over a year ago at $17 per unit, is today at $109. Shares of two other sand miners, U.S. Silica Holdings and Hi Crush Partners, have more than doubled in the past year.

Desperate for more sand, companies are looking to exploit lower grade deposits in states like Texas and Arkansas.

As the frac-sand rush continues, the Wall Street Journal points out that there has been “a massive public backlash about the truck traffic, dust and breathing problems” associated with new mines in Wisconsin, Minnesota and Illinois.

These problems stretch as far as Canada, where officials are warning of a potential public health risk after children were seen playing in spilled frac-sand at an industrial area in the central Alberta town of Bashaw. As the sand is so fine, with a high silica content, breathing it can damage the lungs.

The backlash against the frac-sand boom should also be a warning to countries such as the UK, which recently opened up half their country to fracking.