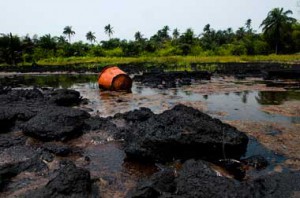 If there is one country where Shell’s broken promises ring hollower than anywhere else it is in Nigeria.

For decades, the company’s operations in the country have been mired by pollution and community protests which in turn have been met with endless cycles of violence against protestors.

The communities in the Niger Delta have been protesting for decades against this chronic pollution and grinding poverty. But year after year, promises from Shell of a better future for the local communities have been found to be as broken as brittle bones.

And the community in Nigeria where the wounds impacted by Shell probably go deepest is the Ogoni, once led by the charismatic Ken Saro-Wiwa, before he was brutally murdered by the military junta in the mid-nineties. Shell has always denied complicity in his death, despite evidence to the contrary.

Ogoniland is where Shell has operated at the centre of this vortex of pollution and violence and where you would have thought the oil company would be most willing to try and make amends. A place where it would try to heal the deep and bitter wounds.

But you would be wrong.

For seasoned Shell-watchers, it is of no surprise that three years after the publication of a report by the UN Environment Programme (UNEP) on oil pollution in Ogoniland, which urged Shell to clean up the area, the company has spectacularly failed to do so.

In fact its operations have been deemed “shameful” by a group of influential NGO’s such as Amnesty International, Environmental Rights Action, Friends of the Earth Europe, Human Rights and Development and Platform.

In a new report they argue that Shell and the Nigerian Government have failed to implement the recommendations in the UNEP report, which would “put an end to the abuse of the communities rights to food, water and a life free of pollution.”

Of the twenty seven recommendations in the report, none had been fully implemented by this month.

“The people of Ogoniland continue to suffer the effects of fifty years of an oil industry which has polluted their land, air and water,” the report argues. Shell for its part, “continues to use deeply flawed clean-up practices,” which were declared ineefective by UNEP.

A crucial recommendation by UNEP to set up a $1 billion fund to clean up contaminated land in the region has not been implemented. The report, entitled, ‘No progress’, also highlights Shell’s manipulation of information to avoid accountability for old and leaking pipes – pipes so old the company will not disclose their age or condition.

Godwin Ojo of Friends of the Earth Nigeria argues that “Three years on and the government and Shell have done little more than set up processes that look like action but are just fig leaves for business as usual. The lack of meaningful action in the face of incontrovertible scientific evidence is outrageous.”

Ojo accused the Nigerian government and Shell of continuing to get away with environmental and human rights abuses in the Niger Delta.

Paul de Clerk of Friends of the Earth Europe adds that: “Three years after finding out that their operations have exposed almost every man, woman and child in Ogoniland – and almost certainly tens of thousands of people in others parts of the Niger Delta – to lifelong pollution, Shell is still more concerned with protecting itself.

He called on the Governments of Nigeria and the home countries of Shell, Netherlands and the UK, which have so far exerted no pressure on Shell, to make sure that the oil company starts a comprehensive clean up and pays due compensation for the pollution in the area.

But Shell’s shameful response continues. The company is trying to spin its web of greenwash and denial, arguing it “has made progress in addressing all the recommendations directed to it.”

After fifty years, it has failed to learn a simple lesson: that actions speak louder than empty words.