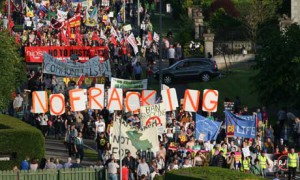 As so often in the past, where America leads, the UK obligingly and belligerently follows. It has been widely known for months that Britain was going to open up vast swathes of its densely-populated land for fracking, but now we have confirmation.

Today, the British Government is announcing the 14th Oil and Gas Licencing round, which will open up over half the country to fracking from the far north of Scotland to the rolling chalklands of the south east.

In opening up such a huge slice of the country, the UK is deliberately choosing to ignore the growing scientific evidence of harm caused by fracking in a simplistic and fatally flawed belief that a fracking bonanza will bring gas prices down as the country achieves energy independence.

The opposition Labour’s Energy Minister immediately warned the government that “there are legitimate environmental concerns that must be addressed before extraction is permitted.”

He added that David Cameron’s Government must take these issues seriously “rather than drawing simplistic and irresponsible comparisons with the USA.”

But this simplistic thinking was all too evident this morning. The newly appointed Energy Minister, Matthew Hancock, told the BBC’s flagship Radio 4 Today programme that it would be “irresponsible” not to frack as it could provide Britain with “greater energy security”.

But at what cost? Fracking is likely to contaminate highly valuable water supplies, cause local air pollution leading to raised morbidity and mortality rates in local communities. Not forgetting that it will of course exacerbate climate change, and keep Britain locked into a fossil future for another generation.

But in classic Orwellian double-speak, Hancock said any moves to frack, where hundreds if not thousands of wells will be be drilled just to see whether oil or gas is present, would be done in a “in a sensitive and careful way”.

In a cynical sop to environmental campaigners, Hancock said that national parks, Areas of Outstanding Natural Beauty (AONBs) and world heritage sites would be protected, unless there were “exceptional circumstances”.

So reading between the lines, even Britain’s most iconic and protected landscapes could be fracked. No where is safe. Caroline Lucas, Britain’s only Green MP, who was arrested last year for protesting against fracking, was outraged: “If this still leaves the door open to fracking in national parks and areas of outstanding natural beauty, it completely undermines the protective status that those areas have been given and renders it meaningless”.

But the farce gets worse. When pressed on the Today Programme to name a community that would welcome the “frackers”, Hancock could not name a single one, despite the promise of up to £100,000 in supposed community benefits, basically a community bribe.

Also speaking on Today was Robert Gatliff, director of energy and marine geoscience at the British Geological Survey who spelt out exactly what the fracking revolution will mean for the UK. Gatliff, who has produced reports on the subject, said it would take some thousands successful wells a year to meet demand.

Gatliff said: “You can also look at how much gas you get out per well in [the United States] per well – at the moment they are getting around 2 billion cubic feet per well, so if we managed to do that, to do our gas production that we use at the moment per day in the UK, we would probably need a thousand successful wells a year – and I think that’s years away and will probably never happen, that’s a big target.”

So here is one of UK’s leading fracking experts saying that the chances are the country will never achieve its goal of producing as much gas as it consumes, even with a thousand wells a year being drilled.

So the experts are warning that the Conservatives will never achieve their goal of lower gas prices and independence. All fracking will do is contaminate communities across the UK and exacerbate climate change.

Make sense to you?