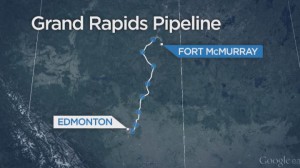 Yet another pivotal battle is brewing in Canada over a little-known pipeline, which has been labelled the “mother of all pipelines” by the country’s First Nations.

The pipeline, called Grand Rapids, is a crucial link in the chain in getting the dirty tar sands to the lucrative markets in America.

TransCanada and its partner Phoenix Energy Holdings want to build the $3-billion pipeline which would transport 900,000 barrels a day of tar sands from Fort McMurray in Alberta to the strategically important hub of Edmonton.

It is planned that the pipeline will eventually feed into the controversial Keystone XL pipeline.

Being so strategically important, the pipeline is scheduled to carry twice as much bitumen as the Northern Gateway pipeline will transport to B.C.

But the pipeline faces fierce First Nations opposition, just as the Northern Gateway pipeline does. And there was a dramatic twist to the on-going regulatory hearings in Edmonton yesterday, when the Athabasca Chipewyan First Nation (ACFN) dramatically walked out of the hearings, arguing that they are biased in favour of industry and fail to address key First Nation and environmental concerns.

Like other proposed pipelines in Canada, Grand Rapids will have a huge environmental and cultural impact, especially if there is a spill.  It will cross 56 waterways, including the Athabasca and North Saskatchewan rivers.

Late yesterday, Chief Allan Adam said in a statement: “Our people’s rights and our way of life are being threatened by out of control development in the region. This project approval process is another example of how the government is trying to push us out.”

Adam also complained that TransCanada’s application included incomplete studies and reports, yet the Alberta Energy Regulator had still granted a fast-track hearing where TransCanada had been allowed to enter an environmental protection plan at the last minute, just as ACFN were about to give evidence.

Adam said that the regulator had put them in an “impossible position.” After what the Canadian press are describing as a “bust up” yesterday, the AFCN called for an 18-month delay to study the document, something that TransCanada flatly rejected. Instead, the regulatory panel have given the AFCN until Wednesday morning to review the new plans.

The hearings are scheduled to last another 10 days. The company is hoping to get regulatory approval as soon as possible and have the pipeline operational by 2017.

However, it is extremely likely that TransCanada will face a legal challenge on the pipeline before it is built. Robert Janes, who represents First Nations in the Northern Gateway fight, argues: “The ACFN is quite determined to protect its rights, and has taken things to court before and it wouldn’t surprise me if this ended up in court.”