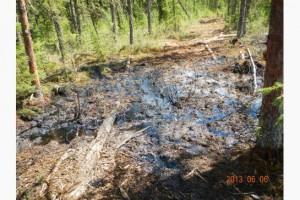 Finally one of Canada’s leading independent tar sands producers has conceded that it is partly to blame for a series of leaks of bitumen in Alberta that have been going on for over a year.

The company concerned, Canadian Natural Resources, which is one of the largest independent crude oil and natural gas producers in the world, undertakes what is known as cyclical steam stimulation (CSS) to extract the tar sands. This is one of the fastest growing methods of extracting the highly polluting and controversial tar sands. But now it seems it has a fundamental flaw.

The process involves injecting thousands of gallons of boiling hot, high-pressure steam into deep underground reservoirs. This in turn liquefies the bitumen and creates cracks through which the bitumen flows. It is then pumped to the surface.

But now it seems the steam can also crack the so-called “cap rock” above the bitumen deposits, leaving a path open for the bitumen to reach the surface in an uncontrolled fashion.

A year ago, last July, the Canadian press reported how Canadian Natural Resource’s CSS operations had resulted in four separate oil spills which had been leaking for six weeks near Cold Lake in Alberta.  One scientist said at the time that everybody in the company and government “is freaking out about this. We don’t understand what happened. Nobody really understands how to stop it from leaking, or if they do they haven’t put the measures into place.”

A year on, according to press reports, the spills still show no sign of stopping.

Ever since the spills started, Canadian Natural Resources stuck with its story that if anything was to blame, then it was long-disused faulty boreholes from previous mining operations, which were bringing the bitumen to the surface.

But finally it has admitted that the spills are being caused, or at least exacerbated, by its own high-pressure CSS operations.

In a detailed report which has just been released, the company has conceded that its high-pressure steaming practices could have fractured the cap rock and be the cause of the spills.

Worrying though, having admitted it is partly to blame, the company says it has no plans to change its operating practices.

The Pembina Institute points out that the admission that the  shale “cap rock” could have been breached by CSS is really important, as the project only received regulatory approval on the basis it would not breach the cap rock.

This has massive implications for other CSS operations. Because if the cap rock cannot withstand pressures caused by the steaming, “then the entire CSS project concept needs to be re-evaluated”, argues Chris Severson-Baker, the Managing Director of the Institute. He adds that the discovery also calls into question the legitimacy of other projects for CSS which were given permits by the Canadian regulator.

Moreover, Greenpeace is now calling on all operations using CSS stimulation to be stopped until the ongoing investigations into the causes of the spills are complete. “We need answers before Alberta faces yet another unexplained disaster,” says Greenpeace Climate and Energy campaigner, Mike Hudema.