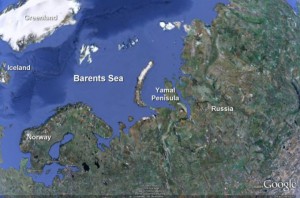 Late last week, the Norwegian government issued a license to energy giant Statoil to allow it to start drilling in the controversial Arctic waters of the Barents Sea.

The Norwegian Petroleum Safety Authority gave Statoil, which is part owned by the Norwegian government, consent to explore in an area in the Barents Sea just north of the country.

The latest licence is reconfirmation that the Norwegian Government is pushing ahead with Arctic exploration, despite the protests of environmental groups. Back in May this year, Greenpeace activists boarded the same rig, Transocean’s Spitsbergen, which will now take part in the new drilling this Autumn.

There is no doubt that despite these protests, the oil industry is pushing for full scale development of the Barents Sea. Over the weekend, the Financial Times reported that many oil companies are hoping that the Barents Sea will become the “next big oil region”.

Although the FT points out that many companies have had a “torrid” time in the Arctic, such as Shell in the Alaskan Arctic and BP in Russia, the companies see the prospects of the Barents Sea differently.

There are still problems: Only today, Statoil announced it would postpone until next year the decision as whether to proceed with the Johan Castberg field in the Barents Sea, just 150 miles north of the Norwegian coast, which is estimated to have between up to 600 million barrels of oil.

But today’s announcement reflects the fact that less oil has been found. Statoil said it was disappointed by what the oil company had found discovered during “an extensive exploration campaign” designed to make the project “sufficiently viable for an expanded infrastructure”.

Others though are ploughing ahead, such as Sweden’s Lundin Petroleum, which has made one of four discoveries in the Barents, having so far spent in excess of $200 million looking for oil.

“We think it’s going to be the next area of major growth in Norway. It has both size and romance,” Torstein Sannes, Lundin’s managing director in Norway told the Financial Times.

Many environmentalists and conservationists would recoil at the idea of there being any “romanticism” to drilling in the Arctic, where any clean up from a spill would be inherently difficult, if not impossible.

Despite this, the Norwegian Government is pushing ahead with opening up the Barents, mindful that oil production from the rest of the country has halved in the past decade.

Last year it opened up the first new part of the Barents sea for two decades. Some 34 companies applied to undertake seismic tests.

Tord Lien, Norway’s oil minister told the FT: “In the long term if we want to continue to be an exporter of energy for Europe and the rest of the world then the importance of the Barents Sea will be increasingly larger.”

Many in the oil industry agree with him.

Herold Paulsen, general manager for Polarbase, which provides support services for region’s gas industry says “We are quite sure that we’ll be drilling for many, many, many years and that we’ll find a lot of gas and oil in the Barents Sea.”

Others though urge caution and are calling for a complete rethink.

Nina Jensen is head of WWF in Norway. “We need a new vision for the Arctic,” she says, adding that there are great opportunities to develop in the area, such as tourism, fishing, biomass, and renewables, but Norway is “not exploring them because we are completely blinded by oil and gas.”