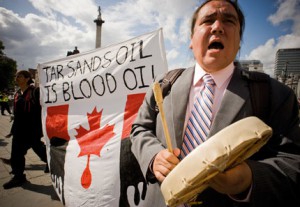 Later today, a scientific study which has examined the health impacts of the toxic tar sands on the health of Canada’s First Nations at Fort Chipewyan in Alberta, will be released.

According to press reports in Canada, the study will add to the growing scientific evidence that the tar sands are poisoning the local ecosystem and the Indigenous communities who depend on it.

The Canadian press, which has seen advanced copies of the executive summary, is reporting the study concludes that the high levels of cancer in Fort Chipewyan are “significantly and positively associated” with employment in the tar sands as well as eating traditional foods.

These foods, such as moose, muskrat and fish have higher-than-normal levels of pollutants, which are associated with tar sands production. Contaminates were found in “traditional” foods such as muskrat and moose.

The study found high levels of arsenic in muskrat, duck and moose, which is of particular concern for young children. Elevated levels of mercury found in duck muscle, kidneys and livers as well as moose and muskrat kidneys, were also of serious concern.

The report argues that the tar sands development “compromises the integrity of the environment and wildlife, which, in turn, adversely affects human health and well-being.”

Eriel Deranger, the communications co-ordinator for the Athabasca Chipewyan First Nation, says the “study maps out pretty clearly a correlation between the consumption of traditional foods and increases in the likelihood of cancer.”

She adds that “It’s a new study, and provides enough information to show there is an urgent need for a more thorough health analysis in the region. Our hope is that it will spur action from the provincial and federal governments that we have been asking for years.”

But it is unlikely the Federal government will listen to the First Nations concerns. Essentially it will let them slowly die of cancer.

The Canadian Government is still pushing for rapid expansion of the tar sands and for the approval of the Keystone XL pipeline. The government will be listening to its friends in Exxon which last week announced it was pumping a massive $1 billion into its refinery in Belgium.

The American oil giant intends to build a new plant to convert heavy oil into diesel and marine fuel. And key to its plans are the Canadian tar sands, as Exxon hopes to refine the tar sands for the European market at its Belgium refinery.

Steve Hart, Exxon’s refining director for Europe, said it was important for the company that the EU did not penalise the tar sands, via its landmark climate legislation, called the Fuel Quality Directive. “Any time Europe starts blocking or restricting access, it’s going to have a negative impact on the refining industry, and on European energy supplies,” he warned.

As the Canadian government looks set to listen to its friends in the oil industry, the negative impact of the tar sands on the country’s First Nations is increasingly going to be overlooked.

The first step in this process will be how the government dismisses the new research and tries to whitewash its findings. The bottom line, though, is that for a government to knowingly allow its indigenous communities to be poisoned is nothing less than cultural genocide.