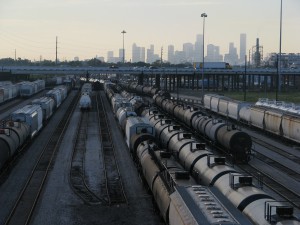 In the ongoing debate about the Keystone XL tar sands pipeline much has been made by pipeline proponents of the ability of rail to take the place of the pipeline if it is not built.

The issue at the heart of this debate is whether rail can support the same level of tar sands production growth, and therefore greenhouse gas emissions growth, as the pipeline would.

While moving tar sands crude by rail has grown in the past year, it is remarkable to see how little of it is reaching the U.S. Gulf Coast, the intended destination of Keystone XL, and the home of the world’s largest concentration of refineries.

Oil Change International has analyzed U.S. Energy Information Administration (EIA) data and has concluded that in March 2014, the latest month for which data is available, a total of 57,000 barrels per day of tar sands crude reached the Gulf Coast region (designated PADD 3 in EIA data) by rail.

As our crude-by-rail interactive map shows, there is a lot of capacity to unload tar sands crude in the Gulf Coast region, but it would appear that most of it is currently not being used. There is some discussion of the gap between loading and unloading capacity and actual traffic levels in the entire North American crude-by-rail system in our recent report on crude-by-rail.

While there is certainly the potential for more tar sands crude to reach the Gulf Coast by rail, the facts on the ground appear to show that actually realizing that potential is more problematic than some commentators have made out.

We will be presenting analysis on why this is so in a forthcoming report on  tar sands by rail, due in July.

In the meantime, check our crude-by-rail information hub for updates and for why the assertion that rail is an inevitable replacement for pipelines is false.