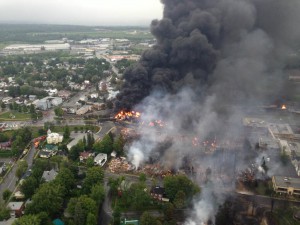 For anyone concerned about the rising spate of crude by rail accidents across North America, the derailment and explosion last July of a crude by rail train in downtown Lac Megantic, Quebec, which killed 47 local residents, has become something of a cause célèbre.

Now later today in Quebec’s Superior Court, lawyers acting in a class action lawsuit will argue that the explosive oil should never have been shipped in the first place, due to safety concerns that were essentially ignored.

Since the disaster there has been increasing evidence of the volatility of North Dakota’s Bakken crude.

However, according to Reuters, lawyers from the Toronto class action law firm Rochon Genova will argue that, not only were the oil companies alert to the dangers of Bakken fuel well before the Lac Megantic tragedy, but they also then failed to handle the fuel safely knowing the dangers.

According to documents filed in court last week, the oil industry and those shipping the oil “simply ignored the need to take any meaningful steps to properly test, warn, label or classify the oil.”

For months before the accident, the oil train cargo routinely arrived at the Irving oil refinery labelled as the least-dangerous class of flammable liquid. A month before the disaster, one Irving Oil executive conceded that fuel testing at the source was “almost non-existent,” according to a Power Point presentation seen by Reuters.

The lawyers are also seeking answers from the regulators, arguing that Canada’s federal transportation agency, Transport Canada, should be accountable for lax oversight before the accident.

The court case will be watched eagerly by communities and campaigners across North America as the issue moves up the political agenda as more and more flammable crude is transported by road.

At the end of last month, a report published by Oil Change International, entitled, Runaway Train, found that if you include Canada, total North American crude-by-rail shipments are currently around one million barrels per day. The report highlighted that over 800,000 bpd of crude oil were shipped on U.S. railroads in 2013, a 70-fold increase from 2005.

OCI has also produced an interactive map to help people see if they are threatened. You can view that here.

Meanwhile, the industry is trying to argue that DOT-111s, the tanker cars which have been heavily criticised in recent months due to accidents such as Lac Megantic, are not inherently dangerous.

However, many people would disagree with him and will be watching the Canadian court case closely.