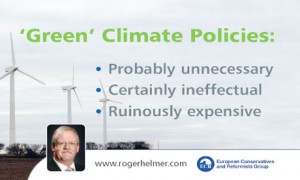 The three main British political parties are still reeling from the success of the United Kingdom Independence Party (UKIP) at the recent local European elections.

For the first time ever, the anti-EU party, UKIP topped the British poll, recording 27.5% of the vote ahead of Labour and the Conservatives.  Nigel Farage, UKIP’s leader claimed the party had caused a political “earthquake” and is now targeting seats in the House of Commons at next year’s General Election.

The first test of UKIP’s growing popularity will come this Thursday at a by-election in the seat of Newark in the British Midlands. The seat was vacated after the incumbent MP, Patrick Mercer, resigned in a cash-for-questions lobbying scandal. The seat is traditionally seen as a safe one for the Conservatives, who polled 54 per cent at the last General Election, with UKIP polling just 4 per cent.

UKIP are fielding the veteran politician Roger Helmer who has been a member of the European Parliament for the East Midlands since the late nineties, first with the Tories and more latterly with UKIP. Helmer is currently UKIP’s spokesman on Energy and Industry.

The 70-year old is certainly controversial and has caused outrage for his recent opinions on rape, women and homosexuality. What has been less reported in the British press at least is that Helmer is a long-standing climate denier with deep ties to leading climate sceptic organisations in the US, such as ALEC, the Competitive Enterprise Institute and Heartland Institute. For the last few years, Helmer has been a key person fostering links between British and American spcetics.

In 2007, Helmer organised and chaired a Counter-Consensual Conference on Climate Change, whose speakers included the arch climate sceptics, Lord Lawson from the UK-based Global Warming Policy Foundation and Chris Horner from the Competitive Enterprise Institute (CEI), amongst others. For years, the CEI received millions from Exxon to deny climate change.

At the time, Helmer asked whether there was “good evidence that the rate of warming is increasing and becoming catastrophic?” His answer was a resounding “No.” He added that “I believe that the case for man-made climate change has not been made. The evidence over very long periods shows that while CO2 levels are correlated with average temperatures, the CO2 levels lag behind the temperature. The inescapable conclusion is that temperature drives CO2, not vice versa.”

The following year at the European Parliament, Helmer argued that “future increases in atmospheric CO2 concentrations from current levels will have only a marginal effect on climate.”

In March 2009, Helmer crossed the Atlantic to speak at the Heartland Institute’s 2009 International Conference on Climate Change, along with many other leading climate sceptics. Later that year Helmer hosted yet another climate denial conference at the European Parliament entitled  “Have Humans Changed the Climate?” Again prominent climate sceptics from the US, such as Fred Singer were invited.

The following year, he spent £9,000 on climate sceptic billboards (see image), placed across the British Midlands.

In 2011, Helmer was back in the US as a featured speaker at the American Legislative Exchange Council (ALEC) Annual Meeting. He spoke at a workshop originally titled “Warming Up to Climate Change: The Many Benefits of Increased Atmospheric CO2.” The title was later changed to “Benefit Analysis of CO2.”

According to his own biography, Helmer says he has now been appointed the  “Adam Smith Scholar” by ALEC.

More recently, in 2012, Helmer spoke again at the Heartland Institute’s international climate sceptic conference. Once again many of the world’s leading climate scpetics were there too. Research by DeSmogBlog revealed that the co-sponsors of the conference had collectively received over $67 million from ExxonMobil, the Koch Brothers and the conservative Scaife family foundations.

If Roger Helmer wins the by-election on Thursday, he will be UKIP’s first MP at Westminster.  With scientists warning that urgent action is needed more than ever on climate change, to have such a high-profile climate sceptic becoming an MP can only damage British democracy, but it also has to be extremely bad news for the climate.