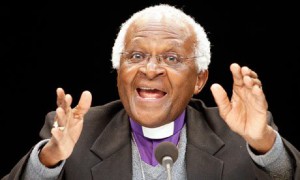 Over the last couple of years the Canadians have become accustomed to growing international criticism of their reckless and belligerent exploitation of the tar sands. They have aggressively just carried on drilling, nonetheless.

But when one of the iconic human rights activists in the world, South African Archbishop and Nobel Peace Prize Laureate, Desmond Tutu, calls the tar sands “filth” and a result of “negligence and greed”, it will be much more difficult for the Canadians to ignore.

“The fact that this filth is being created now, when the link between carbon emissions and global warming is so obvious, reflects negligence and greed,” Tutu told an audience of about 200 at a conference in Fort McMurray over the weekend.

During the conference, which was held to highlight First Nation treaty rights, Tutu added that the tar sands were “emblematic of an era of high carbon and high-risk fuels that must end if we are committed to a safer climate.”

He also added that tar sands “development not only devastates our shared climate, it is also stripping away the rights of First Nations and affected communities to protect their children, land and water from being poisoned.”

Following the speech, the veteran anti-apartheid campaigner went on helicopter tour over the tar sands.

This is not Tutu’s first foray into the politics of the tar sands. He had previously signed a letter by 11 Nobel Prize Laureates urging U.S. President Barack Obama to reject the controversial Keystone XL pipeline.

Over the weekend Tutu likened “the struggle of citizens against the pipelines” as being on “the front lines of the most important struggles in North America today.”

Tutu listed a number of campaign ideas which would have delighted anti-fossil fuel campaigners: boycotts of events sponsored by the fossil fuel industry; health warnings on oil company adverts and divestment of fossil fuel industry investments held by universities and local  municipalities.

The conference was co-sponsored by the Athabasca Chipewyan First Nation, whose elder, Chief Allan Adam said that Tutu’s words had brought “a credible stance” to the position that First Nations needed to be a full consulted partner in all future decisions about both the current and upcoming tar sands projects which are located in their traditional territory.

Eriel Deranger, the Athabasca Chipewyan First Nation’s director, opened the second day of the conference. “We will not tolerate threat to our rights, lands, water and to us all and all future generations,” she said.

“Internalized oppression is perpetuating the cycle of oppression, ” she added. “If we don’t break that cycle, break the process of colonization and understand our strength as original inhabitants and original governments of this country, we’ll never make it.  We have to teach our communities.”

She finished by saying: “We have to break the cycle.  Truth and reconciliation is such an important thing.  We have to come back to a deep understanding of our rights and the powers we hold as Indigenous people.”

Not surprisingly, Tutu’s words have created a backlash in Canada. One commentator called him a “hypocrite, and a symbolist, for whom imagery and headlines matter more than facts and truth.”

But when the Canadians have to stoop so low as to attack someone with the international respect of Desmond Tutu, you know that they are extremely worried.