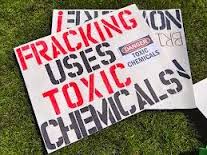 Sixty four environmental and community groups, led by Earthrights International, are asking the EPA to close what they deem as “serious gaps” in the regulation on toxic air emissions from oil and gas operations.

The number of oil and gas wells is burgeoning. As of 2011, there were already over a million wells in the US, with a further 45,000 new wells, especially fracking wells, expected to be drilled each year until 2035. That’s nearly another million new wells.

The petition – which runs to 112 pages – asks the EPA to use its authority under the Clean Air Act to develop “robust emission standards” to limit the emissions of cancer-causing benzene and formaldehyde.

Available data suggests that at least 100,000 tons of benzene, formaldehyde and naphthalene are currently being released into the air. These pollutants have been linked to respiratory and neurological problems, birth defects, and cancer.

Earthjustice attorney Emma Cheuse, who filed the petition on behalf of the groups, said: “Oil and gas wells release chemicals linked to cancer, birth defects, and respiratory disease, and EPA should protect our communities, especially our children, from exposure to these hazards.”

The petition points out that the EPA’s oversight is currently inadequate and that the Agency has “a responsibility under the Clean Air Act to protect people from toxic air emissions nationwide.”

Cheuse adds that “people across the United States need leadership at the national level, need the EPA to act.” As states have failed to regulate air emissions from drilling, the EPA needs to step in “so people won’t have to wait years and years for protection.”

Last week, the Obama administration scored its third legal victory in less than a month in its fight to cut air pollution from power plants.

The US Court of Appeal ruled that the EPA could tighten standards on highly dangerous fine particulate matter, from coal power plants, refineries, manufacturers and even vehicles.

The EPA had been challenged by the National Association of Manufacturers, which said the rule had been overreached.  “Time after time, courts have found that EPA’s clean air standards are solidly based in science and the law,” Peter Zalzal, an attorney with the Environmental Defense Fund, said in a statement after the ruling.

The EPA concluded that although the rule will inflict $53 million to $350 million in annual costs on industry, it would provide public health benefits of $4 billion to $9.1 billion.