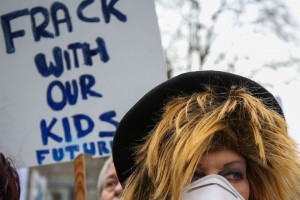 The British Government is set to unleash a fracking frenzy across large parts of the country as politicians try and replicate the American energy revolution.

It seems that nowhere will be safe, with reports in yesterday’s Sunday Times suggesting that the country’s most protected landscapes, such as national parks will be allowed to be fracked. The controversial technology will also be able to be used under cities.

In total, the Department for Energy and Climate Change is expected to announce that a staggering two-thirds of Britain could be opened up for fracking companies.

Some of the country’s most iconic and beautiful landscapes could be under threat, from the chalk downlands of Kent to the North Yorkshire moors made famous by the vet James Harriot.

The rich rolling hills of South Devon and the flatlands of North Norfolk could all be threatened. So too could the affluent Cotswolds, home to the rich and famous.

Compared to the vast rural areas of America, Britain is a small crowded island and it looks like the Conservative-led government will have a genuine fight with rural and urban communities across the land.

We have already seen communities fighting fracking from Balcombe in Southern England, to Manchester and Lancashire in the North. Many of the proposed areas are traditionally Conservative, so the government is picking a fight with its own voters.

And slowly but surely, fracking development is gathering a-pace. This week, one of the largest British fracking companies, Cuadrilla will submit a planning application to Lancashire county council to frack for a site in the North West.

The company is now boasting that the first quantities of fracked gas could enter the national grid by late next year.

But even this one fracking operation shows the size of the fight ahead, with at least six sites with some 10 to 20 wells at each site. That could be 120 wells in just one fracking operation. In total thousands of wells will be needed. There can only be conflict with communities and householders.

The majority of people are opposed to fracking. A recent YouGov poll revealed 74% of Britons oppose plans to allow fracking under their home without their permission.

In order to get around this, the government is set to change the law to make it easier to frack beneath people’s homes without having to give them compensation or permission.

The boss of Cuadrilla agrees that local communities should get nothing.  Francis Egan said: “I don’t think there’s any disturbance. If someone flies two miles above your house, do you get compensation?”

Further pressure to frack came last week from a House of Lords Committee, which urged the government to fast-track fracking and prevent landowners from stopping fracking.

Lord MacGregor, who chairs the Economic Affairs Committee, said: “The committee strongly supports the decision to go ‘all out for shale’ … Developing a successful shale gas and oil industry should be a national priority.”

But Doug Parr, chief scientist at Greenpeace UK, accused the Lords or “cherry-picking the wafer-thin evidence that fits a foregone conclusion about the benefits of shale gas.”

Greenpeace also pointed out that several members of the committee have energy industry interests. One member, Baroness Noakes, holds shares in at least three firms with interests in shale gas, including Centrica.

The fact that this point has hardly caused a ripple of concern in the mainstream media, shows just how corroded our politics has become.