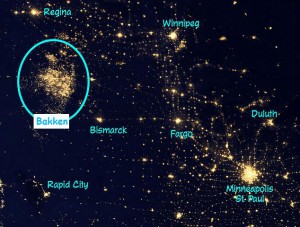 The North American fracking industry is hailing the production of its billionth barrel of fracked oil from the vast Bakken oil fields as a cause for celebration.

The pace of the development of shale oil is reflected in the fact that two thirds of this oil has been produced in the last three years.

Jack Stark from Continental Resources, the largest stakeholder in North Dakota oil fields, argues that “This is something our country can celebrate as the oil and natural gas industry continues to create jobs, grow our economy and secure America’s energy future.”

Stark argued the billion barrel milestone “validates the immense potential of the Bakken field” and that “development is just beginning”.

But everywhere you look, resistance against fracking is growing across North America and indeed in every country where the controversial practice takes place.  Just this week, the world’s most prestigious environmental prize – The Goldman – was jointly awarded to an Ithaca-based lawyer, Helen Slottje, who has helped organise fracking bans in 172 communities across New York.

Slottje, who is despised by the fracking industry, said she would use the prestige from the award and money that comes with it to raise global awareness of her campaign.

“Fracking is a symptom of a much larger problem in our society, an oligarchy, a complete separation of people making decision and those whose lives they affect,” she said. “We’re going to do whatever we think is going to help the voice of the people,” she added.

Meanwhile, in the notoriously litigious US  there was a warning to the industry last week when a family was awarded $3 million in damages for health problems related to fracking near their land.

The family took Aruba Petroleum, who had 22 natural gas wells within a 2-mile radius of their property to court. Last week a jury awarded them $2.9 million in damages.

The Parrs’ Houston-based attorney, Brad Gilde argues that the Parrs’ court victory, which is the first jury award for personal injury in an American fracking case, “marks an important precedent for the future of natural gas production.”

So the industry may have marked a milestone in production, but everywhere communities and people are fighting back to regain control of their future.

As if to emphasize the point, last week, Beverly Hills became California’s first municipality to ban fracking after the city council unanimously voted to ban the controversial practice.

Local Council member John Mirsch said: “This is not a ‘not in my backyard issue’ — it should not be in anyone’s back yard. And we also need to think long-term, even if our city is not a center of drilling — injecting millions of gallons of water and chemicals at high pressure into the earth can’t be good.”