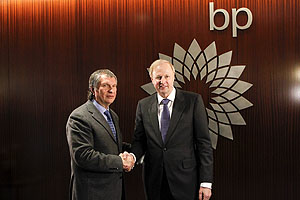 The oil industry always maintains that politics is a job for somebody else – it just gets on with drilling for oil and gas.

The line is a fallacy of course, as the industry uses its economic might to prop up politicians that give it favourable tax breaks or subsidies or push its climate destructive policies.

Indeed, I remember one oil executive saying that the industry liked doing business with dictators as they were historically much more stable than democracies which could be so unpredictable.

The situation in Ukraine is nothing if not unpredictable.  Yet slowly and surely the oil majors are being dragged into the diplomatic crisis, and once again they are putting their money on the dictator rather than democracy.

Yesterday the US increased sanctions on Putin’s inner circle and for the oil companies one name stands out: Igor Sechin (pictured with Bob Dudley from BP). Yesterday Sechin was added to the list of “Specially Designated Nationals” by the US Treasury or put another way he is now blacklisted.

Why this matters to the international oil majors is that Sechin has been described as “the kingpin of Russia’s oil industry” who is “Russia’s second most powerful man” and one of Russia’s true Oligarchs.

Sechin is chairman of the country’s top oil producer Rosneft, who is a former KGB official from Putin’s inner circle, who has been called the “Scariest Man on Earth” due to his intelligence background.

“Putin trusts him more than anyone else,” argues Sergei Markov, vice rector of the Plekhanov Russian University of Economics in Moscow.  By placing Sechin on the sanctions list, the Obama Administration is creating “a legal and political tangle for BP”, argues the British Daily Telegraph. The oil giant owns just under 20 per cent of Rosneft’s shares.

BP’s immediate response is a stinging rebuke to Washington and London, arguing that the British oil giant remains “committed to our investment in Rosneft, and we intend to remain a successful, long-term investor in Russia.”

Furthermore, Sechin has said that Rosneft’s work with BP would not be affected arguing that their “effectiveness won’t decrease, our cooperation won’t be hurt and will dynamically evolve.”

But it may not be that simple.

Currently BP’s American chief executive, Bob Dudley, sits on Rosneft’s board. However, the US Treasury argues that “US persons are generally prohibited from dealing with” people on the sanctions list.

It is hard to see how Dudley can remain on the board if Sechin does too. Will Dudley leave the room every time Sechin speaks, or vice versa. Of course not. The charade surely cannot last.

Moreover as the New York Times points out once a year the CEO’s from companies such as BP and Shell meet with Putin and Sechin at an annual economic forum in St. Petersburg. Such relationships, suggest the paper, now “look increasingly complicated.”

It is also looking complicated for investors too. For example, will America investors be able to take part in conference calls if Sechin is on the line?

Basically it will become harder and harder to do business with Rosneft if Sechin stays as CEO and that can only hurt BP.

But it is not the only company affected. Exxon Mobil’s investment plans with Rosneft in the Arctic may also soon be heading for trouble too.  For more on this see previous blog.

But as pressure grows on the oil majors to act we know that as per so often before they will back the dictator rather than democracy.