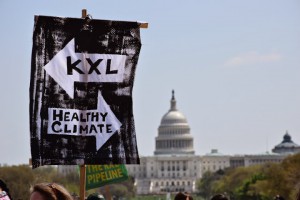 Under a clear-blue spring sky, thousands of people joined ranchers and First Nations leaders from the Cowboy and Indian Alliance for a ceremonial procession along the National Mall in Washington DC to protest against the controversial Keystone XL pipeline on Saturday.

It was the largest demonstration of the near-week long protest intended to put further pressure on the Obama Administration to reject the pipeline.

“Today, boots and moccasins showed President Obama an unlikely alliance has his back to reject Keystone XL to protect our land and water,” said one of the organisers of the “Reject and Protect” gathering, Jane Kleeb, the Executive Director of Bold Nebraska.

Veteran anti-tar sands and KXL celebrities, musician Neil Young and actress Daryl Hannah were among the crowd who rallied on the National Mall and then marched past the Capitol building.  “We need to end the age of fossil fuels and move on to something better,” Young told the cheering crowd.

“Every time Keystone XL gets delayed it just gives us more time to speak up and tell the truth about this dangerous pipeline,” Meghan Hammond, a sixth-generation Nebraska rancher told the crowd.

“The proposed pipeline is going to be coming through our backyard,” added Robert Allpress, a rancher from North-Central Nebraska. “We live in an area that is very slide-prone and TransCanada has never checked that out. They’re in the wrong place at the wrong time and we don’t need them because they’re not beneficial for the United States.”

The protests also included representatives from First Nations communities living in the shadow of the dirty tar sands in Canada. “We have come to a point where we have no choice left but to lift up our inherent treaty rights – our birthrights,” said Crystal Lameman, a member of the Beaver Lake Cree Nation.

She added: “As First Nations people, we abide by natural law, and there is nothing natural about a people dying from cancer and suffering from respiratory illnesses caused by tar sands production.”

Also present on the march was Eriel Deranger, spokesperson for the Athabasca Chipewyan First Nation “Our nation has faced the extension of Alberta’s tar sands into our traditional treaty territory,”  added Deranger. “This expansion is contributing to the annihilation of our land, culture, and the destruction of our waterways.”

The highlight of the day for many was the official presentation of a hand-painted tipi to the Smithsonian National Museum of the American Indian as a gift to President Obama.

A spiritual object of historical importance, the tipi represents their hopes for protected land and clean water. The titles of the tipi reflected the two names given to President Obama by the Lakota and the Crow Nations back in 2008: “Man Who Helps the People” and “One Who Helps People throughout the Land.”

These names will be redundant if Obama approves the pipeline. “Keystone XL is a death warrant for our people,” said Oglala Sioux Tribal President Bryan Brewer, who was one the leaders of the presentation of the tipi to the Smithsonian. “President Obama must reject this pipeline and protect our sacred land and water. The United States needs to respect our treaty rights and say no to Keystone XL.”

And if the oil industry and its supporters thought that the Alliance was going to ride quietly into the sunset, they will be bitterly disappointed.  “This is just the beginning. The Cowboy and Indian Alliance will ride again,” Bold Nebraska’s Jane Kleeb warned.