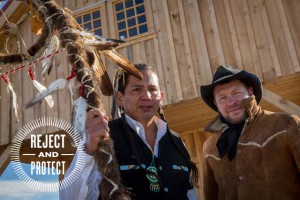 This week a unique gathering will take place in Washington which people are urged to participate in to show their opposition to the controversial Keystone XL pipeline.

Starting today, Earth Day, the Cowboy and Indian Alliance (CIA), a group of ranchers, farmers and indigenous leaders, will start building an encampment on the National Mall for a week’s worth of “Reject and Protect” actions against the pipeline.

For five days they will camp near the White House, performing daily ceremonies and holding events that will send a clear message to President Obama: “reject the Keystone XL pipeline,” and “protect our land, water, and climate.”

Later this afternoon, the Alliance will start erecting 15 tipis on the Mall before a 40-person ceremonial horseback ride from the Capitol down the National Mall.

One of the planned protests will also take place outside the home of Secretary of State John Kerry.

The week’s protests will culminate in a ceremonial walk on Saturday when thousands will descend from across the USA to join the Alliance for a ceremonial walk by the Capitol, which will finish with the deliverance of a tipi to the Museum of the American Indian in honour of President Obama.

The week of protests comes as the political fate of the pipeline remains uncertain.

As Oil Change International pointed out in response to the State Department’s announcement, it “means that tar sands producers will continue to face uncertainty regarding how to get their dirty oil to market, and that will only continue to slow investment in this dirty, dangerous oil. Every day the pipeline isn’t built is a good day for our communities and the climate”.

And every day the pipeline does not get built, its hits TransCanada, the company building the pipeline, in the pocket. As of yesterday the company’s share price was down nearly 4 per cent since the announcement.

The political pressure on Obama is growing elsewhere too.

Last week, ten Nobel Laureates, including former President Jimmy Carter, sent a letter to Obama and John Kerry urging them to reject KXL. For many it was the third time they had written to the President over the issue asking him to reject the pipeline.

The letter argued that “a rejection would signal a new course for the world’s largest economy. You know as well as we do the powerful precedent that this would set. This leadership by example would usher in a new era where climate change and pollution is given the urgent attention and focus it deserves in a world where the climate crisis is already a daily struggle for so many.”

Jane Kleeb, a Nebraska political activist who is in Washington for the Reject and Protect protests, welcomes the further delay with KXL.

“While we are thrilled with the delay, because we think a delay only helps our side, we look forward to the day that the president rejects the pipeline,” she says.