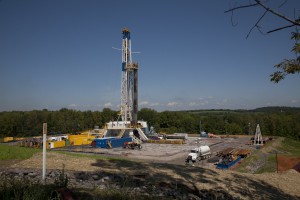 On Sunday the world’s leading climate scientists called for a rapid disinvestment from fossil fuels into renewables.

And in calling for prompt disinvestment from coal and oil, they argued that gas could be a “bridging” fuel between the dirtiest fossil fuels and clean renewables.

Ottmar Edenhofer, the co-chair of the latest Intergovernmental Panel on Climate Change report (IPCC), argued that shale gas produced from fracking “can be very consistent with low carbon development and decarbonisation”.

Seeing gas as a bridging fuel is nothing new. Policy makers and even some in the oil industry have been trying to portray gas as a green fuel for years.

But in doing so they are ignoring the growing scientific evidence that gas is not green at all, and one of the reasons for this is the leakage of methane, which is one of the most potent greenhouse gases. Some scientists argue methane could have as much as 100 times more global warming potential than carbon dioxide.

And with perfect timing new scientific research was published yesterday which torpedoes the idea that shale gas should be seen as a clean bridging fuel.

Edenhofer may soon be regretting being so enthusiastic about shale gas.

The research, published in the Proceedings of the National Academy of Sciences, examined methane leakage from fracking wells in southwestern Pennsylvania. It concluded that methane was being released into the atmosphere at rates that were 100 to 1,000 times greater than estimated by US regulators.

Using a novel “top down” technique, the scientists monitored methane emissions from seven wells in the region, taking measurements from a specifically modified plane. They concluded that they were emitting, on average, 34 grams of methane per second.

The researchers were able to trace the methane plumes back to individual drilling wells, which are not normally associated with large leakage rates.

“It is particularly noteworthy that large emissions were measured for wells in the drilling phase – in some cases 100 to 1,000 times greater than the inventory estimates,” argues Paul Shepson, a professor of chemistry and earth atmospheric and planetary sciences at Purdue University, a co-author in the study.

These new rates compare to estimates of 0.04 to 0.3 grams of methane per second calculated by the Environmental Protection Agency (EPA). These readings are normally taken at ground level.

In turn, the EPA has been examining the issue too and could well issue its own report on the subject as soon as later today. The EPA is under pressure to update its own findings. Last year, scientists also reported in the Proceedings of the National Academy of Sciences that methane emissions in the continental U.S. might be 50% greater than the EPA’s official estimates.

In February this year, further research was published which added to the evidence that the EPA is underestimating the amount of methane leakage from oil and gas drilling.

All this growing evidence suggests that the IPCC, which is correct on so many aspects of climate change and energy policy, has underestimated the global warming impact of fracking.

It also means that shale gas should not be seen as a bridging fuel to a clean energy future.