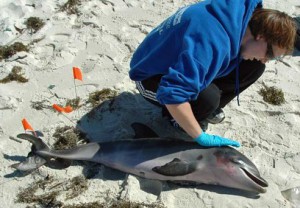 As the fourth anniversary of BP’s devastating Deepwater Horizon spill nears, new research reveals that many species of wildlife are still struggling to recover.

Since the oil spill in April 2010, which spilled over 200 million gallons of oil into the Gulf of Mexico, the National Wildlife Federation has been monitoring the impact of the spill on important habitats and species. As they have on every anniversary so far, they have issued a report on the state of the wildlife in the Gulf.

And the report makes grim reading. Anyone who has closely followed the aftermath of the Exxon Valdez spill twenty five years ago will know that an oil spill can irreversibly impact different wildlife, and some species in Alaska are still struggling to recover even decades later.

That pattern is being repeated in the Gulf. Since the spill in 2010, over 900 dolphins have been found dead or stranded in the area. Last year, dolphins were still stranding at a rate three times the average rate. In December last year, scientists concluded that there was strong evidence linking the poor health of dolphins in one particular area, Barataria Bay, to exposure of the oil.

Ongoing research has also found that dolphins swimming in oiled areas are underweight, anemic, and showing signs of both liver and lung diseases.  “We remain particularly concerned about impacts of the oil on bottlenose dolphins,” concludes the NWF.

If a predator at the top of the food chain, such as a dolphin,  shows signs of trouble, it is likely that other species further down the chain are in dire straits too. “When you have sick dolphins, it tells you there’s a problem here and it needs to be investigated,” argues Doug Inkley, senior scientist for the NWF.

Turtles are also dying in record numbers. There are five species of sea turtle in the Gulf, all of whom are listed as threatened or endangered by the Endangered Species Act. Roughly five hundred dead sea turtles have been found every year for the past three years in the area affected by the spill—a dramatic increase over normal rates.

“The Kemp’s ridley sea turtle has long been the poster child for the possibilities of restoration in the Gulf,” argues Pamela Plotkin, associate research professor of oceanography at Texas A&M University and director of Texas Sea Grant. “Once close to extinction, it has rebounded dramatically over the past thirty years. But four years ago, the numbers of Kemp’s ridley appear to have flat-lined. We need to monitor this species carefully, as the next few years will be critical.”

Oysters are also struggling to recover, with reproduction rates still low. The oil spill has also affected tuna in the area. Nearly a thousand brown pelicans collected since the spill had been exposed to oil with half of them dying. Their nesting grounds in mangrove swamps were also contaminated, meaning numbers in the future might struggle. Coastal birds such as loons, have also been badly affected.

“Despite what BP would have you believe, the impacts of the disaster are ongoing,” says Sara Gonzalez-Rothi, the NWF’s senior policy specialist for Gulf and coastal restoration. “Last year, nearly five million pounds of oiled material from the disaster were removed from Louisiana’s coast. And that’s just what we’ve seen. An unknown amount of oil remains deep in the Gulf.”

“Four years later, wildlife in the Gulf are still feeling the impacts of the spill,” adds Doug Inkley, from the NWF: “The science is telling us that this is not over.”