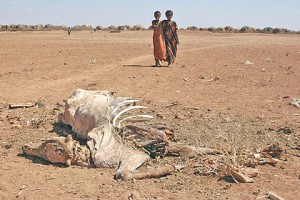 It has taken some 300 lead scientists three years to collate the evidence. Many other scientists collaborated in the research.

Their combined efforts stretch to 2,600 pages, contained in 32 volumes, and have been signed off by hundreds of officials from 115 countries.

The end result is that the UN’s Intergovernmental Panel on Climate Change (IPCC) has issued its most sobering, starkest and definitive warning yet about the risks of climate change, warning that “nobody on this planet will be untouched” by climate change.

It is will not just affect future generations. It is happening now.

“Climate change is happening, there are big risks for everyone and no place in the world is immune from them,” argues Professor Neil Adger of Exeter University, one of the numerous lead authors of the report.

For the sceptics it makes uncomfortable reading. Although climate change is here already – causing weather related disasters, rising sea levels, affecting food supplies, increasing the intensity of storms, melting sea-ice and killing coral through ocean acidification – the worse is yet to come. And no one will be safe.

Christopher Field, of the Carnegie Institution’s Department of Global Ecology in California and co-chair of working group II, said “It is true that we can’t find many benefits of climate change and I believe it’s because there aren’t many benefits, even though we tried really hard to find them.”

And climate change will impact the poor the hardest. Food supply and security is one of the major areas of concern, with global wheat supplies already declining and the future of maize levels a worry too.

“Negative impacts of climate change on crop yields have been more common than positive impacts,” the report concludes. Some global fish stocks are predicted to decline by up to 60 per cent too. We also face unparalleled species extinctions on land and at sea.  Ocean acidification will be a major problem if it is not already.

However Governments are woefully unprepared for the future, the report finds.

Vicente Barros, co-chair of the IPCC working group II argues that “We live in an era of man-made climate change. In many cases, we are not prepared for the climate-related risks that we already face.”

And it is not as if they haven’t been warned already.

The IPCC has been warning governments now for a quarter of a century. As Graham Readfern points out in today’s Guardian “more than 25 years after scientists started compiling that first report, the latest report is similarly alarming – just with added impacts and greater certainty.”