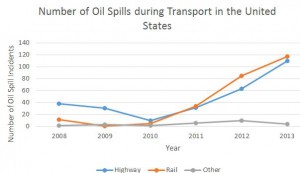 Another day, another oil spill in the US.

Yesterday an unknown amount of oil was spilt from BP’s vast, sprawling Whiting refinery into the waters of Lake Michigan. Although the spill was said to be contained by yesterday evening, it had still contaminated nearly a kilometre of shoreline.

The spill came just weeks after BP announced plans to increase its processing of crude oil at the refinery as it converts its entire refining capacity to processing dirty Canadian tar sands crude.

Meanwhile rescue efforts continued yesterday to clean up 168,000 gallons of fuel oil that spilled into the Port of Houston near Galveston, Texas, which has impacted local birds and marine life and polluted over 15 miles of coastline.

The spill was caused when two vessels collided in the extremely busy port. CNN labelled the spill as an “environmental disaster.”

Much of the concern over safety surrounds what are known as DOT-111 cars, the antiquated work-horses of the North American railways, but which are seen as ill-equipped to safely transport volatile crudes.

Yesterday, Canada’s two largest railways announced that they intend to phase out or retrofit their own small fleets of older DOT-111 tank cars as part of a move to improve rail safety.

Nor are American pipelines much safer. A recent analysis of the Pipeline and Hazardous Materials Safety Administration’s data on pipelines by the Center for Biological Diversity found that since 1986 there have been nearly 8,000 incidents (equating to 300 per year on average), resulting in more than 500 deaths, over 2,300 injuries and nearly $7 billion in damage. In 2013 alone, some 5 million gallons of oil spilled from America’s pipelines.

These figures give us real pause for thought.

As Europe steps up lobbying for the US to increase exports of gas, as the oil industry lobbies to relax the crude export ban, as Canada looks to export the dirty tar sands across America to export markets, as America contemplates building the Keystone XL pipeline, and as the shale gas revolution continues to grow, it can only mean one thing: there will be more accidents, and more spills.

Is this a price we are willing to pay?