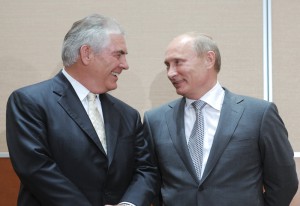 President Putin’s bullish and “strutting” defence of Russia’s swift annexation of Crimea yesterday seemed to have taken many by surprise.

But his emboldened actions are a result of Western impotence over Ukraine. And of course the main reason for this comes down once again to oil and gas.

Europe and America’s ineffectual imposition of sanctions and travel bans is a direct response to their addiction to Russian oil and gas.

As Bloomberg has pointed out “Vladimir Putin’s control over $160 billion in oil and natural gas exports may be his most potent weapon in Russia’s face-off with Europe and the U.S. over Ukraine.”

Last year Russia, the world’s largest oil producer, exported $160 billion worth of oil and gas to Europe and the US.

Energy is at the heart of the stand-off.  The West does not want to impose too stringent economic sanctions as Russia might turn off the gas, but Russia in turn does not want to stop the flow of gas as it is dependent on the money.

They both have, in the eyes of one analyst, a “gun to each others head.” Michael Wittner of Société Générale’s commodities group argues that “The key point for the oil markets is that, in sharp contrast to Iran, Europe and Russia have a gun to each other’s head which should prevent either side from using the oil weapon and stopping oil trade flows.”

He continues that “If Europe is heavily dependent on Russia, Russia is even more dependent on Europe. Europe needs the oil and Russia needs the money. ”

But there is another huge energy power-play here that has received scant attention.  As Steve Horn pointed out this week on Desmogblog: “few have discussed the ties binding major U.S. oil and gas companies with Russian state oil and gas companies,” in the ongoing crisis.

An analysis of oil industry data for Oil Change International shows that since 2008 the oil majors have paid around $12 billion to the Russian government in taxes and royalties.

In 2013, Shell and Exxon alone paid over $2 billion. This kind of direct cash is indispensable to Putin in the current climate, and helps insulate him from any direct sanctions threat.

But the commercial relationships cut both ways too. Exxon’s tie up with Rosneft to explore in the Arctic is hugely strategic and its importance cannot be understated. The two companies signed a strategic agreement in 2011.

In January this year Rosneft  and Exxon announced that they are going to drill their first Arctic well in 2014, with some analysts saying that the area may hold more oil than Norway’s North Sea.

They are also going to start fracking shale in Siberia and are planning a natural-gas export terminal in Russia’s Far East.

“We have a unique partnership,” Glenn Waller, Exxon’s Russian chief, said at the time. “They have the world’s biggest reserves and we have the largest market capitalization.”

Russia may have the largest reserves, but it is struggling to maintain production levels. Like many countries, Russia’s conventional oil and gas fields are in decline. In order to keep its production at its current level of 10 million barrels of oil a day, the country has to bring on difficult new fields and this is where Exxon’s Arctic venture with Rosneft is key.

According to a presentation given late last year by James Henderson to the Oxford Institute for Energy Studies “Two thirds of Russia’s future resources are located offshore, with more than half in Arctic waters”.

The Arctic is where Russia’s biggest oil prize is located. It is where Exxon will help Russia maintain its production and with it its economic might.

On Monday, speaking on the Rachel Maddow show, ex US-Ambassador to Russia, Michael McFaul argued the “critical decision” for the Americans and Europeans would be to go for economic sanctions. He added that it would be a “very dramatic” move to go after the joint venture.  McFaul has since called on the US government to impose more sanctions after Russia annexed Crimea.

Whether that happens remains to be seen. Exxon could be Putin’s Achilles heel. The only question is whether Obama has the audacity and courage to impose the sanctions that would actually damage Putin.

Sanctions that would make it impossible for Exxon to do business with Russian oil companies such as Rosneft would leave Putin’s Arctic dream in tatters. But they would destroy Exxon’s ambitions too.