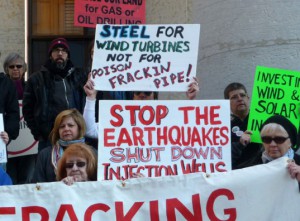 Fracking operations at one site in the state of Ohio remain suspended until further notice after five small earthquakes over a period of twenty four hours earlier this week.

Yesterday’s tremor was recorded at 2.1, following earlier ones reaching 3.0 on the Richter scale, enough to be noticeable but not enough to cause structural damage.

According to local media reports, the US Geological Survey located the epicenter of the first earthquake almost directly below one of two fracking sites run by Houston-based Hilcorp Energy, which has drilled seven wells at the site over the last two years.

The Ohio Department of Natural Resources (ODNR) has now halted operations: “Out of an abundance of caution, we notified the only oil and gas operator in the area and ordered them to halt all operations until further assessment can take place,” it said.

It added  “ODNR is using all available resources to determine the exact circumstances surrounding this event and will take the appropriate actions necessary to protect public health and safety.”

The New York Times quotes Mark Bruce, a spokesman for the Department, saying it was too early to determine the cause. “What we’re focusing on now is getting all the data from the company,” he said. “We’ll examine it first and decide next steps after that.”

Hilcorp Energy, not surprisingly, tried to argue that the two are not connected “It is far too early in the process to know exactly what happened and we’re not aware of any evidence to connect our operations to these events,” it said in a statement.

Others disagree. Alison Auciello, the Ohio organizer for environmental group Food and Water Watch, argues that that the location and depth of the earthquakes’ epicenters are consistent with others caused by fracking.

She also argues that “Before companies can be permitted to conduct fracking operations, states should require companies to assess how close they are to a fault line before granting them a permit.”

Ohio has history when it comes to earthquakes and fracking, when a series of earthquakes hit in 2011. Although authorities initially denied any connection to fracking, it was eventually proven otherwise. The state subsequently banned drilling injection wells under certain conditions.

Fracking has also been linked to earthquakes in Arkansas, Oklahoma as well as Lancashire in the UK and in British Columbia in Canada.