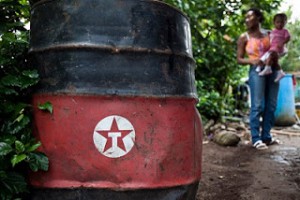 Indigenous rights groups reacted angrily yesterday to what they labelled as a “misguided judgement” by a New York District Court Judge, Lewis Kaplan, who ruled that lawyers representing Amazonian Indians had used “corrupt means” and “fraud” to win a legal case against Chevron in Ecuador.

The dramatic judgement is the latest setback for 30,000 indigenous Indians in their decades long legal battle against Chevron (which took over Texaco) to pay for chronic and routine pollution in the country’s rainforest. It is now one of the longest-running legal cases in corporate history.

As stands, the ruling means that the communities from five different Amazonian tribes cannot now use US courts to enforce the ruling against Chevron.

Texaco’s pollution occurred from the mid-sixties to the early nineties with the lawsuit starting in 1993 alleging that the oil company had knowingly dumped 18bn gallons of toxic waste water and spilled 17m gallons of crude oil into the rainforest.

It was only in 2011 that, after a lengthy legal battle, an Ecuadorean judge ordered Chevron to pay $18.2bn for “extensively polluting” the Lago Agrio region of the Ecuadorian rainforest. Although the decision was upheld by Ecuador’s highest court last year, the amount of damages was reduced to $9.5bn.

Chevron, whose CEO John Watson described the latest ruling as a “resounding victory” for the company, had argued that it only lost the case in Ecuador because the plaintiffs lawyers had paid bribes.

The US judge Lewis Kaplan essentially agreed with the oil company, arguing that “justice is not served by inflicting injustice. The ends do not justify the means. There is no ‘Robin Hood’ defence to illegal and wrongful conduct.”

This ruling is part of a legal court case brought by Chevron in 2011 against the plaintiff’s lawyer Steven Donziger and his legal team for fraud and racketeering. They were accused of fabricating evidence, bribing judges and even paying for the ghost-writing of the final verdict, as well as being involved in other actions which had “perverted” the course of justice.

Donziger called Kaplan’s decision “appalling” and blamed Kaplan’s “implacable hostility” toward him and his Ecuadorean clients. “Through this decision, we now have the spectacle of a Manhattan trial judge purporting to overrule Ecuador’s Supreme Court on questions of Ecuadorean law,” he said in a written statement.

Donziger said he would pursue an “immediate and expedited appeal.”

Han Shan, a US spokesman for the plaintiffs in Ecuador, said they “do not accept this court’s jurisdiction nor this ruling.” He added “The affected communities long ago gave up hope that a U.S. court would provide them relief from Chevron’s contamination, which has taken their loved ones, poisoned their lands, and imperiled their cultures.”

Also reacting to the judgement, Amazon Watch, the US campaign group which has worked with the plaintiffs in their struggle for justice, said the “verdict is an example of Chevron buying and bullying its way to a verdict with 60 law firms and thousands of legal professionals hell-bent on exhausting the Ecuadorians and their allies. Such a verdict will ultimately prove useless in Chevron’s efforts to evade justice.”

Chevron still faces legal action in other countries as well, including Argentina, Canada and Brazil.