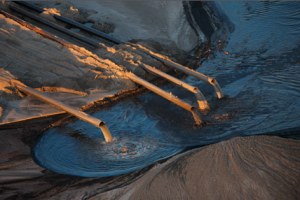 For years there has been growing evidence that toxic chemicals from Alberta’s vast tar sands tailings ponds were leaching into groundwater and the nearby Athabasca River.

The tailing ponds now cover a huge area – some 176 square kilometres – and given their size it is hardly surprising that some seepage may be occurring.

But some estimates say it could be a huge amount of pollution, with 6.5 million litres leaking a day from a single pond.

And although the oil industry has acknowledged that seepage might be an issue, they have tried to argue that it is indistinguishable from naturally occurring bitumen deposits and therefore we do not really know the size of the problem.

Now a team of scientists from Environment Canada have been fingerprinting the toxic and cancer-causing chemicals to tell if they are natural or from the tailings ponds.

The study, conducted under the tar sands monitoring project, has been accepted for publication in the journal, Environmental Science and Technology.

And what the scientists found could have huge ramifications for the tar sands industry. They have proved that the tailing water is polluting ground water and seeping into the Athabasca River, although they do not quantify by how much.

“With some of the groundwater samples containing chemical profiles similar to tailings ponds, this is the strongest indication to date that process water is reaching the river system,” said Richard Frank, lead author of the paper.

“Well, it looks like what they’ve seen is that in fact the tailings ponds are leaking,” Bill Donahue, an environmental scientist with the tar sands advisory committee told the Canadian media about the findings.

“So, there goes … that message we’ve been hearing about” adds Donahue. “‘These tailings ponds are safe, they don’t leak’ and so on.”

The Canadian government is beginning to act like the tobacco industry – putting industry profits before the health of the local people.

Now one Albertan New Democrat Rachel Notley, is now arguing that the Federal government should not approve any new tar sands projects until they can be sure that the tailings ponds are not leaking.

She argues that the Canadian government should “slow down the expansion until they have found a way to stop the leakage that’s going on now. Right now, there’s no economic imperative on industry for them to do it.”

But stopping expansion is the last thing on the Federal Government’s minds.