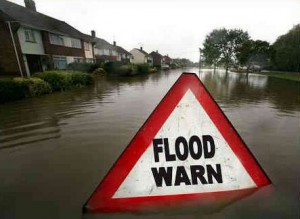 More and more people in the UK believe that the severe flooding which has affected large swathes of Southern England from the Somerset levels in the west to the affluent towns and villages in the Thames valley near London, are the result of climate change.

As tens of thousands of people have been affected by the wettest January in the UK for over 250 years, two polls conducted have found that around fifty per cent of the population believe that the flooding and extreme storms are a result of climate change.

Today the Guardian reports that a poll of 2,000 people undertaken for Avaaz found that 46% of respondents agreed that the “frequency and severity of the storms” were a result of climate change, while 27% did not agree.

This follows another recent poll undertaken for the Observer newspaper which found that 51 per cent of voters believed the recent floods are a sign of climate change while 24% do not.

So that is roughly twice as many people believing that climate change is to blame than do not make the connection. Interestingly amongst young people, 60 per cent blame climate change.

More and more politicians are making the link too. The opposition Labour leader Ed Miliband said at the weekend “The science is clear. The public know there is a problem. But, because of political division in Westminster, we are sleepwalking into a national security crisis on climate change.”

But the Conservative leader David Cameron has been severely criticised for prevaricating over the link between climate change and the flooding, before finally telling Parliament under pressure that he “very much suspects” that the two are connected. However, his Minister in charge of the flooding response, Environment Secretary Owen Paterson, a known climate sceptic, has been lambasted for his ineffectual response to the flooding and not drawing parallels between the two.

Other senior figures are making the link between the stormy weather and climate change, though. Last week, the Met Office’s chief scientist, Dame Julia Slingo, said that “all the evidence suggests there is a link to climate change”.

And last Friday, Lord Stern, the author of the influential 2006 report on the economics of climate change wrote that “The record rainfall and storm surges that have brought flooding across the UK are a clear sign that we are already experiencing the impacts of climate change.”

He pointed out that the UK is not alone in experiencing extreme weather – Australia, Argentina, Brazil, the Philippines and the US have all been experiencing severe weather in one form or another. It is, says Stern, “a pattern of global change that it would be very unwise to ignore”.

Many people, especially those still mopping out their homes across Southern England, would agree with him.