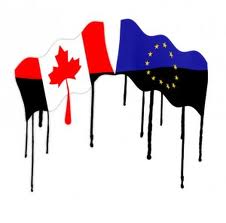 As political pressure mounts in the US to lift the country’s decades-old crude oil export ban, Reuters reported yesterday that the US government has recently authorized limited re-exports of foreign crude to Europe for the first time in years.

According to data the news agency obtained via Freedom of Information requests, the Department of Commerce granted two licenses to export crude to the UK last year and another two to Italy.

The revelations immediately caused a stir, as they could be seen as the beginning of the end of the export ban. However US officials were quick to point out that they only covered re-export of foreign oil and not domestically produced shale oil.

Although the Government refused to say where the oil came from, the most obvious place is Canada.

This throws up the obvious question: will the tar sands soon be on their way to Europe, via the US?

Firstly, it is worth pointing out that although a license has been given it does not necessarily mean that any oil has been exported. But it may mean that, although the Obama administration does not lift the blanket ban, it could basically allow more and more export licences, especially of the tar sands.  And the Keystone XL remains central to Canadian hopes of exporting the tar sands.

As Reuters outlines, the export licenses “could also fuel critics of Canada’s oil patch and the Keystone XL pipeline, which some fear may allow for the United States to be a conduit for growing oil sands production.”

Allowing tar sands into Europe would be largely dependent on what happens to the landmark climate legislation, the Fuel Quality Directive, which currently discrimates against the dirty tar sands. Over in Europe the increasingly heated debate about the FQD continues. Environmental groups are now considering taking legal action against the European Commission if they renege on a commitment to label the tar sands as more polluting than conventional crude oil.

As we have repeatedly pointed out the EU has been the subject of an unprecedented lobbying campaign for a number of years from the Canadians, and latterly the Americans.

Nusa Urbancic, from the Brussels-based environment group, Transport & Environment,  said: “Allowing dirty tar sands to flood into Europe is going to raise emissions, not lower them.”

And it is not just carbon dioxide emissions. A new scientific study, published on Monday in Proceedings of the National Academy of Science concluded that officially reported emissions of certain hazardous air pollutants from the tar sands have been greatly underestimated.

The new study, which is the most comprehensive yet undertaken on the tar sands suggests that levels of carcinogenic polycyclic aromatic hydrocarbons (PAHS) were 2-3 an order of magnitude higher than previously reported.

“Our study implies that PAH concentrations in air, water, and food, that are estimated as part of environmental impact assessments of oil sands mining operations are very likely too low,” says Professor Frank Wania, one of the authors of the study. “Therefore the potential risks to humans and wildlife may also have been underestimated.”

The study is just another reason to be concerned about the tar sands and their environmental impact and for not allowing them to be exported to Europe.