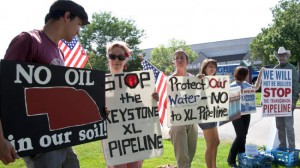 When the State Department’s long-awaited Final Environmental Impact Statement into the controversial Keystone XL (KXL) pipeline was published last week,  the report argued that KXL would not significantly add to global warming.

It therefore supposedly passed the test that Obama outlined in a speech last summer when he said he would only approve the pipeline if it did not “significantly exacerbate” the problem of climate change.

However, as Oil Change International pointed out last week, the report conceded that the emissions could be “1.3 to 27.4 MMTCO2e annually,” which is equivalent to as many as 5.7 million new cars. And it does not take a climate scientist to tell you that 5.7 million new cars is clearly a significant increase in carbon emissions.

But there is another deep flaw with the report that is yet to be resolved and could be KXL’s ultimate undoing. Its analysis was contracted out to Environmental Resources Management (ERM), a British contractor with links to the oil industry. When publishing its long list of documents last Friday, the State Department had to suffer the ignominy of also publishing a whole set concerning ERM’s apparent conflicts of interest.

As Bloomberg reported last Friday, the scrutiny about ERM “is about to get heated.” The controversy kicked off in July last year, when environmental groups accused ERM of “lying” about its ties to TransCanada, the company building the pipeline.

The groups alleged, amongst other things, that “on its conflict of interest disclosure forms, ERM lied to the State Department about not working with TransCanada. In fact, ERM and TransCanada have worked together at least since 2011 on another pipeline project in Alaska.”

Although these allegations are being investigated by the State Department’s Inspector General, they were not enough to delay publication of the final Environmental Impact Assessment, despite the fact that 25 members of the US House of Representatives asked Obama to wait for the outcome of the investigation.

And maybe that investigation should also look at some other misdemeanors by ERM:

In their great book on the Baku-Ceyhan-Tbilisi pipeline, called The Oil Road, James Marriott and Mika Minio-Paluella outline how part of the Environmental Impact Assessment for the pipeline was produced by ERM. The book recounts how ERM supposedly carried out a telephone study in one village, but “when the study was in progress, the village was in ruins. There were no telephones; nor was there anyone to answer them”.

Ultimately anti-pipeline campaigners argued that the potential impacts identified in ERM’s report were “severely flawed”. They also outlined that ERM had a “vested interest” in supporting the project, as it was partly funded by one of their clients, BP.

Likewise, for Shell’s controversial Sakhalin gas project off Russia, ERM were contracted to produce the Sakhalin II Phase II EIA, which was accused of serious failings by numerous environment and conservation groups, including WWF and Pacific Environment.

Pacific Environment’s review of the EIA argued that Shell and ERM had underestimated the risks to endangered Western Grey Whales. The “prediction of success of mitigation measures to protect Western Gray Whales  from extinction [was] based on conjecture rather than quantifiable data or analytical modelling.”

The EIA also ignored the risks of tanker accidents, inputted incomplete information on the risk of seismic events and the risk to salmon, and included an insufficient social impact assessment, amongst dozens of failings outlined.

In conclusion, Pacific Environment argued “These fundamental flaws indicate that the Sakhalin II Project, Phase 2 EIA is insufficient  to provide assurance that the environmental  impacts of the project are fully understood, are accurately portrayed, are acceptable, are manageable, and will be subject to adequate  mitigation over the life of the project”.

So it seems ERM has a history of controversy. It is no wonder then that environmental organizations are urging Secretary of State John Kerry to launch an independent and transparent review of the Final Environmental Impact Statement for KXL.