The #NoKXL movement is truly showing its power, breadth, and size Monday night.

Just 72 hours after the final environmental impact statement for the Keystone XL pipeline was released by the State Department, a huge coalition of groups including Oil Change International, CREDO, 350.org, Sierra Club and countless local activist groups around the country like TEJAS in Texas, Michigan CATS, and BOLD Nebraska, have come together to organize over 275 vigils in 49 states. 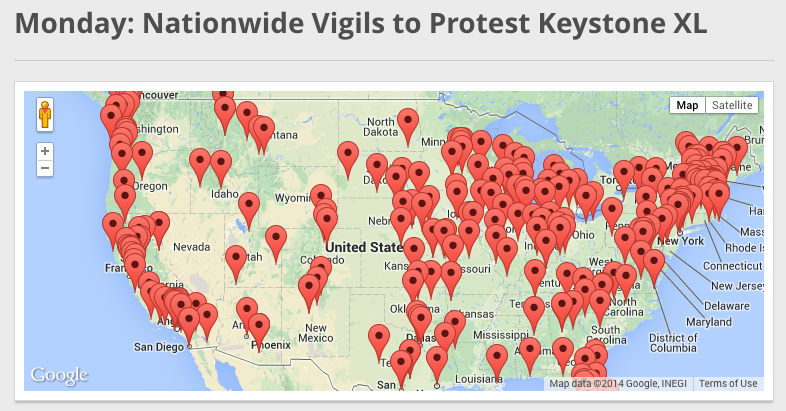 Photos began streaming in via twitter and other outlets at 6pm eastern time…and to call them inspiring wouldn’t do them justice. #NoKXL crowds gathered everywhere from DC to Nashville, Baltimore to Burlington, New York to Leesburg, Houston to Chicago. They gathered in the cold of Boston and the heat of Miami and everywhere in between.

Photos are being captured in an amazing Flickr feed…a (constantly-updating) map of those photos can be found below.

As 6pm on the West Coast approaches as this blog is being published, another wave of vigils is about to begin. But one thing is already clear tonight: the movement to stand up against Big Oil, dirty tar sands, and disastrous pipeline projects is strong, determined, and beautiful.