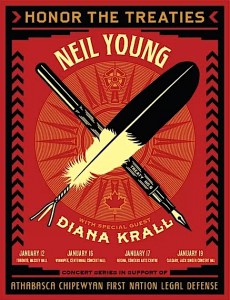 d his week-long “Honor the Treaties” tour of Canada yesterday by likening the tar sands to a war zone.

“It is like a war zone, a disaster area from war, what’s happened up there. It’s gone,” he said during a press conference.

Starting his tour last Sunday, Young has helped raise the issue of the tar sands across the country, with the goal of generating legal funds for the Athabasca Chipewyan First Nation as they try and prevent the doubling of Shell’s Jackpine tar sands mine.

The First Nations argue that any expansion will cause extensive environmental damage to their land and water and air, as well as violating treaty and environmental laws.

On Wednesday, he went further, saying he was “shattered” after visiting the tar sands area. He then compared the devastation caused by the tar sands to Hiroshima. “There’s no way to describe it, so I described it as Hiroshima, which was basically pretty mellow compared to what’s going on out there.”

Comments such as these have provoked fierce criticism from both Canada’s federal government and the oil industry. The industry is now concerned that Young’s tour is “driving a wedge” between them and Canada’s First Nations.

At an alternative press conference yesterday, Dave Collyer, president of the tar sands lobby group, the Canadian Association of Petroleum Producers, vehemently attacked Young, arguing his rhetoric was “ill-informed” and “divisive”, which was a “disservice to Canadians”.

“Speaking on behalf of the thousands of people who work in this industry and have a great deal of pride in what they do and how they do it, we find the misrepresentations made throughout the tour quite irresponsible,” Collyer added.

Meanwhile Federal Natural Resources Minister, Joe Oliver, who more than most has tried to spin a positive image on the tar sands, labelled Young’s comments “insulting.”

Young’s tour comes as it has emerged that Canada’s carbon emissions will soar by nearly 40 per cent by 2030 primarily due to the tar sands expansion. Moreover, it is likely that Canada is also under-reporting its emissions from the dirty tar sands.

Those emissions will also get worse if Canada approves the Keystone XL pipeline. On the tour the rock star has also attacked the proposed KXL as well as the Northern Gateway pipelines, arguing the former would not benefit anyone and the latter would merely export oil to China, which he called one of the dirtiest places on the planet.

As the personal attacks against Young increase over the next 48 hours as his tour reaches its conclusion, the worrying point for the industry is that Young’s final concert in Calgary on Sunday is sold out.