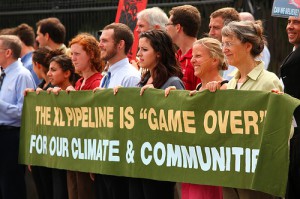 Later today, the Californian businessman, Tom Steyer, will host an event at Georgetown University entitled: “Can Keystone Pass the President’s Climate Test?” The summit, which will be livestreamed, will examine the KXL’s carbon footprint.

It is now six months since President Obama made his own address at the same University, saying that he would only approve KXL if it did not significantly increase carbon pollution. Since then, more and more evidence has emerged showing KXL’s climatic impact.

Newly released documents suggest that the Canadians are also worried about how KXL’s climatic impact could halt the pipeline.  They have been warned that America’s burgeoning oil boom could derail plans to build the KXL, as American oil is cleaner than dirty Canadian crude.

Canada’s US Ambassador was warned in internal emails, released under access to information legislation, back in the summer that America’s oil boom could alter the viability of the controversial pipeline. The warning came from Canadian energy counsellor, Paul Connors.

“The significant increase in U.S. domestic production in recent years is light sweet crude which has lower [greenhouse gases] than heavy crude,” Connors wrote in an email to Canada’s US Ambassador, Gary Doer in June.

Connors argued that the optimum way for America to profit from the boom would be to export its slightly cleaner light crude, which is much in demand internationally and therefore commands a high price. “However, if reducing U.S. [greenhouse gas] emissions is the goal, the U.S. could decline to export its light sweet crude surplus [and] domestic light sweet crude would begin to [replace] heavy oil imports.”

So if American light crude replaces Canada’s heavy tar sands crude, the whole viability of the KXL is in doubt.

And now the boss of TransCanada, the company that wants to build KXL, has moaned about how environmental groups have framed the KXL debate in terms of its climatic impact. TransCanada’s boss, Russ Girling, argues that this framing is “unfair” and that environmentalists have “concocted a story” that KXl is a “fuse” that could light one of the largest carbon bombs on Earth.

Maybe he should watch Tom Steyer’s webcast later today to find out about some inconvenient climate truths about the KXL.