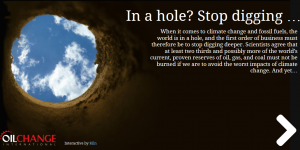 Yesterday, Oil Change International (OCI) published its great new interactive graphic that shows that fossil fuel reserves continue to grow, whereas the scientists are telling us that we can burn less and less carbon.  The graphic was also published in The Guardian newspaper.

The OCI analysis shows that fossil fuel companies gained access to more than twice as much in fossil fuels as they produced between 2007 and 2011. The reality is that less than a third of the remaining reserves can be safely burned.

The graphic states “Scientists agree that at least two thirds and possibly more of the world’s current, proven reserves of oil, gas, and coal must not be burned if we are to avoid the worst impacts of climate change.”

As Steve Kretzmann, Executive Director of OCI said yesterday, “The first rule of holes is simple: when you’re in one, stop digging. We are in a huge hole when it comes to the climate and yet we continue digging our way to climate catastrophe.”

Moreover much of the recent oil being found is not conventional oil at all. Two thirds of the recent increase in oil supply is from what the International Energy Agency calls unconventional crude, such as the tar sands, oil shales, or natural-gas liquids.

This matters from an economic and environmental perspective because unconventionals are more financially expensive and more carbon intensive to produce.

The situation is so bad that many tar sands wells in Canada are actually using more energy than they produce. The only reason that they are profitable at the moment is due to the low price of natural gas, compared to the price of oil. If the price differential between the two narrows, the industry will be in trouble.

As I blogged yesterday, from a climate perspective, the fact you are using more energy to produce a product than you get from it is total madness.

Many political and industry commentators have repeatedly lauded the fracking revolution in the US which has brought down gas prices. Environmentalists have repeatedly been warning that one of the downsides will be the amount of methane – a potent greenhouse gas – being released.

And now a new scientific study, published in the Proceedings of the National Academy of Sciences, argues that US emissions of methane are probably 50 percent higher than current estimates by the US Government.

But we do know that the study is one of the most comprehensive ever undertaken with over 13,000 measurements analysed in 2007 and 2008. So it is no coincidence that methane levels began to rise as fracking took off, although the study only captures the beginning of the fracking boom.

Scot Miller, one of the co-authors of the study, argued that Texas, Oklahoma and Kansas now represent a significant source of domestic methane emissions. “The fossil fuel industry are probably an important source of methane gas emissions in that part of the country,” he said.

The scientists are now examining more recent data, which would account for the sharp increase in oil and gas drilling in the US in recent years. There will be no surprises if they find methane levels are even greater now. But we will have to wait for the results, although the research should serve as a huge warning about the climatic impact of fracking.

In the meantime, both the tar sands research and this new methane analysis reveals that the cost to the climate from unconventional oil is greater than previously thought.

They too add to the argument that “when in a hole, stop digging”.