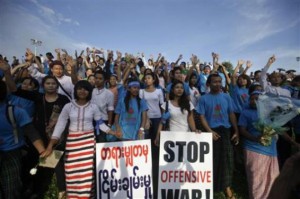 Over 60 foreign companies are preparing to bid for rights to explore for oil or gas in 30 offshore fields in the latest bidding round in Burma, described by the Financial Times as one of the most exciting for years.

The biggest prize will be 19 deep-water blocks seen as the country’s “crown jewels”, where they can operate without the hindrance of local partners.

Amongst the oil majors bidding in the November 15 auction are ExxonMobil, Royal Dutch Shell and Statoil, drawn by the potential large reserves and the fastest growing energy markets in the world in Asia. There is certainly excitement building.

Duc Huynh, an analyst at IHS in Kuala Lumpur also tells the paper “The offshore bid round will be a huge game changer for everyone involved. For the past few years, the international oil companies have just been window shopping in Myanmar, waiting for the deepwater blocks to become available.”

The problem though for the companies is that, no matter how lucrative the reserves, mineral extraction still lies at the heart of continuing civil conflict in the country.

One UK-based human rights activist, Jamila Hanan, recently accused the Burmese government of “petroleum-induced genocide” towards the Rohingya Muslim minority with the building of one pipeline being built in Sittwe, where many of the Rohingya live.

This is a country where the minimum of dissent can get you jailed. In September, a Burmese court sentenced 10 activists to three months in jail for protesting without a permit against the controversial Shwe gas pipeline.

And then there is the case of the petro-dollars. An article in the Asian Correspondent points out: “The bulk of profitable resources in Burma, including oil and gas, are unearthed from ethnic states and sold to neighboring countries. Local populations have never been enjoyed the benefits of these deals as the profits wend directly to the military.”

And although the military junta has started on the painfully slow road to reform, the problem for many of the oil majors is that there is still no resource transparency in the country, despite some promises of reform.

So we have no idea how much of the money that, say, Shell will pay will be paid to the military. Billions of dollars in revenues from previous gas sales has never been accounted for, believed to be siphoned off by the corrupt military.

And the same may well happen again here. Shell or one of the majors may well get the “Crown Jewels”, but at what cost to the Burmese people?