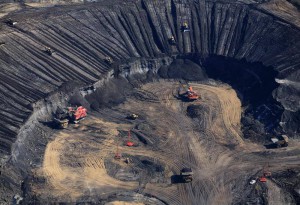 Officials at the US State Department, who are weighing up whether or not to approve KXL, are trying to assess the validity of moving oil-by-rail as an alternative to the controversial pipeline, according to a report by Reuters.

The fate of the pipeline could depend on what they find.

In preparing its final review, officials from the State Department have zeroed in on the logistics and viability of moving crude-by-rail instead of by KXL.

As Reuters points out: “If there is enough evidence that the oil sands region will quickly grow with or without the 1,200-mile line, that would undercut an argument from environmentalists that the pipeline would turbocharge expansion.”

In making its initial findings, the State Department had argued that saying no to KXL would do very little to slow the tar sands as the Canadians could move the crude by rail instead. However, the Environmental Protection Agency countered that higher rail costs could limit growth.

At the moment it costs approximately $10 a barrel to transport heavy crude to the Gulf Coast by pipeline compared to $17 via rail.

The bottom line is that KXL does matter: it remains one of the cheapest ways of getting oil to the market. Any extra cost makes the tar sands less viable to investors.  One Canadian columnist is arguing that rejecting KXL would cost the Canadians about $1.7-billion each year. That is one sizeable chunk of cash.

The scary thing for the Canadians is that if KXL was rejected, it would mean that the tar sands could be less likely to be developed.

Cost is important, but so too is climate. There are many people who argue that the tar sands should be left in the ground. They could be what are rapidly becoming known as “stranded assets”.

Last week, investors managing assets worth about $3 trillion wrote to the world’s largest oil and gas companies, calling on them to prepare for a declining demand for fossil fuels due to concerns of climate change.

Suddenly reserves worth billions of dollars are being thought of “stranded assets”, that will never be burnt. And top of many people’s list of assets needing to be stranded are the tar sands because of the climate impact, but cost is also a factor.

Craig Mackenzie, head of sustainability at Scottish Widows Investment Partnership, told the Financial Times that “In a world where oil demand is weaker, and the oil price goes lower, then it doesn’t make sense to invest in projects with high break-even points.”

And that is where the KXL is important. Without the pipeline the break-even point for the tar sands gets one hell of a lot higher.