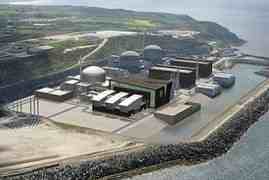 Last Friday, the Chinese and Canadian governments promised to work more closely on energy issues, that likely means that we will witness greater collaboration between the two countries in exploiting the dirty tar sands.

The move is being widely condemned by critics. When the British government signed the Coalition agreement in May 2010, it pledged not to build any new nuclear power plants if had to pour in public subsidies.

Many people argued that if the government kept to its word there could be no new nuclear build. But today, British Prime Minister David Cameron, hailed the agreement for 2 new nuclear power stations to be built by French-owned EDF and the Chinese as saying it would “kick-start” a new generation of nuclear power plants in the country.

The 35-year deal guarantees the companies a price of £92.50 per megawatt hour. This is twice the current wholesale market rate for electricity or as one newspaper put its “a massive subsidy”. The Government will try and spin it otherwise, but the government has just handed a huge cheque to the French government and its monitory partner, the Chinese government.

For two years the British government has been haggling over the amount of money it was going to give EDF: with some estimates that it amounts to £80 billion. But as negotiations stalled it became clear the deal would not have progressed without the Chinese investment.

The Chinese company investing is the China General Nuclear Power Group, which is 100% owned by the Beijing government. It is described by the Guardian newspaper as “one of the biggest companies you have never heard of.”

The state-owned company, which has six reactors in China, sees its investment as the first step in establishing itself on the world stage.

The Guardian says that “involvement in Hinkley Point is a key part of the globalisation strategy,” with Britain seen by both the French and Chinese governments “as the perfect shop window to market their atomic expertise.”

What we are witnessing is the increasing influence of the Chinese in the global energy market into areas where they have previously not ventured.

Move several thousand miles to Latin America, where Brazil is pressing ahead with its giant offshore Libra oil field today. Libra is seen as one of the world’s most promising oil and gas fields, which could produce 1 million barrels of oil a day.

It could be one of the biggest oil discoveries this century. Despite the huge prize, potential bidders so far have been disappointing with the majority of them state-owned companies from China and India.

And once again the Chinese cannot afford to miss out. “This is too big an opportunity for them to miss,” argues Ivan Cima, head of Latin American research at Wood Mackenzie.

This is a new business model by the Chinese, who have historically invested in production rather than exploration. “Winning the license would shift strategy for Chinese state producers to one of drilling and developing new deposits, after years of buying into operating fields and more advanced exploration projects in Latin America,” notes Businessweek.

If a Chinese company wins, it would add to a growing list. Since 2010, China has picked up developed assets or fields with advanced exploratory activity in Ecuador, Argentina, Venezuela, Brazil and Colombia.

One thing is certain: the Chinese are changing the global energy market, and their need for all types of power – from dirty tar sands to deep offshore oil and nuclear power – will play an increasing role in our energy future, for better or worse.