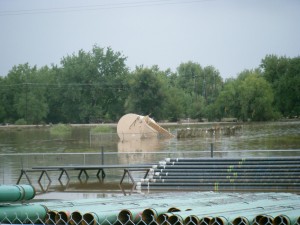 When the devastating floods affected Colorado earlier this month, critics of the fracking industry were quick to point out that the number of inspectors was totally inadequate for the task of inspecting the damaged wells.

They highlighted how Colorado only has 17 full time oil and gas inspectors, for a state that has some 50,000 oil and gas wells.

As the floodwaters recede, these inspectors have so far only reached a third of the well sites.

So far, in an assessment they released yesterday, they have found eight ‘notable’ oil spills totalling 27,000 gallons of oil.

The inspectors are also tracking 10 additional locations where there has been some evidence of release of oil, and another 33 well sites where damage to tanks or other equipment has occurred.

Indeed, the inspectors are said to be “completely overwhelmed” by the size and scale of the destruction caused by the floods, with some well sites remaining inaccessible due to the flooding and washed out roads.

Jared Polis, a Democratic representative from Colorado, told the Guardian newspaper that the “Inspectors are completely overwhelmed. There are only a couple of dozen in the state and some areas remain inaccessible even today. The number of inspectors is insufficient to reach all the sites.”

Approximately 1,300 wells remain shut down, down from 1,900 last week. Most of the oil releases reported to date came from storage tanks or tank farms operated by Anadarko Petroleum Company, which is also struggling to assess the damage to its wells.

Anadarko spokesman John Christiansen is quoted in the press as saying: “We’ve got a couple of amphibious vehicles and flat-bottom boats that we’re using, but really until things have a chance to dry out and some of the infrastructure issues are sorted out, it’s going to be difficult”.

Also worrying for the authorities is that much of the oil will have been washed away by floodwaters. Whilst this means that it will have been diluted, it also means that any recovery is likely to be all but impossible.

And no one seems to know if any pipelines have leaked yet too.

There could well be more bad news ahead as the flood water continue to recede.