This post was originally published on www.texassharon.com It features a new report published today by Earthworks Action that details an unacceptable dereliction of duty on the part of regulators charged with protecting the public from pollution.  It is yet another example of how America’s oil & gas boom is poisoning our democracy, as well as our land, water, air and people.

Washington, DC – A new report released today, September 19th, provides an important window into a disturbing national pattern regarding the oversight of fracking-enabled oil and gas development: regulators, charged with protecting the public, are actively avoiding evidence that fracking is harming the public. The report focuses on Karnes County, TX in an attempt to illuminate a growing national pattern of absentee regulators.

“This isn’t living anymore. It’s just existing, and wondering what you are going to breathe in next,” said impacted Eagle Ford Shale resident Mike Cerny in his interview with the report author.

In an unprecedented investigation of oil and gas operations and government oversight in Texas’s Eagle Ford Shale, Earthworks reports a toxic mix of irresponsible industry operators, negligent regulators, and the families who suffer the consequences. Specifically, Reckless Endangerment while Fracking the Eagle Ford, reveals:

Oil and gas operations in shale formations release chemicals to air, water, and soil that are hazardous to human health. 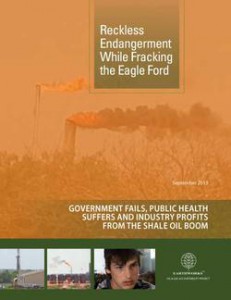