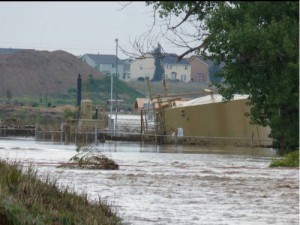 relentless flooding in Colorado has made the news worldwide, with an estimated eight dead, 600 people still unaccounted and 1,500 homes destroyed, according to officials.

But the scenes of devastation mask another potential catastrophe.

There is growing concern that toxic fracking chemicals have leaked out in the floods and oil and gas pipelines have buckled and broken under the pressure of the intense flood waters. Others pipelines have been “compromised” and  at least one pipeline is said to be leaking.

Tanks storing chemicals and oil have been overturned and damaged. But as far as the industry is concerned everything is hopefully under control.

Tisha Schuller, president and CEO of the Colorado Oil & Gas Association, said yesterday that, although there were thousands of facilities affected, “As far as we know, all the wells that have been affected by flooding have been shut-in.”

But at the end of the day, her assessment could be wildly optimistic. Schuller concedes though that the industry will only be able to assess the damage once the flood water recede, including whether any wells have leaked fracking chemicals.

Meanwhile more and more pictures of flooded wells are appearing online. One of those to take picture is Cliff Willment an anti-fracking activist, in Lafayette, who spent two days documenting flooded wells. He says that hundreds of wells are underwater.

He argues that “shutting-in” does not isolate all the potentially harmful hydrocarbons that could escape into the floodwater. And there are not enough state officials and inspectors to assess the widespread damage.

Willmeng says that “Our concern is that all of these sites contain various amounts of hazardous industrial wastes that are now capable of spilling into the waterways and onto the agricultural land. Many of these chemicals are carcinogenic, neurotoxic, and known disruptors of the human endocrine system.”

He complains that there is no testing to see what leakage is taking place.

Some activists have even gone as far as complaining that there a media blackout concerning the flooded frack wells. If this is the case, the best way is to spread the message via social media.