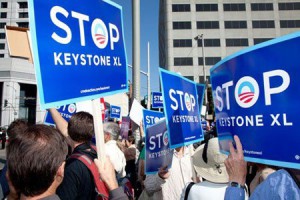 This Thursday marks a milestone in the Keystone XL pipeline debate: it is five years since the application for the pipeline was first lodged with the authorities.

Since then, the environmental community has turned Keystone XL from a routine boring oil pipeline into one of the most defining issues relating to climate change of our time.

It has become the litmus test of Obama’s environmental credibility. In those five years, much of the world has woken up to the dangers posed by the dirty tar sands.

But the lobbying for KXl has been relentless too.

And so it goes on. Supporters of the pipeline will use the anniversary to make a renewed push to persuade President Obama to say yes to the pipeline.

The Republican Senators John Hoeven of North Dakota and Democratic Senator Mary Landrieu of Louisiana are pushing for a bipartisan resolution declaring that the pipeline is in the national interest. They are likely to push for an amendment to the Energy Bill, later today.

“If Congress can find it in the national interest, using the abundance of favorable information that has accumulated over five years on the project, then surely the president can too,” Hoeven says.

Meanwhile, the pipeline’s proponents are also planning a House subcommittee hearing on Thursday, the fifth anniversary of the day Keystone’s application was submitted in 2008.

The push comes as the ex-head of the Environmental Protection Agency, Christine Todd Whitman, has labelled the tar sands “dirty”, but warned, whatever happened with the KXL, the “Canadians are clearly going to do this” and they are “going to sell it [tar sands oil] somewhere”. She warned “I don’t think we should be naive to think that the Canadians are going to go ahead with this no matter what”.

As part of this “no matter what” strategy TransCanada last week released a study commissioned from the audit firm Deloitte Touche that estimates the benefit to Canada from the company’s proposed Energy East Pipeline. The Deloitte report estimates that it would boost Canadian gross domestic product by $35 billion over 40 years and create 10,000 jobs during the construction phase.

But we are used to the oil industry releasing pie-in-the-sky numbers for the benefits of the tar sands.

And there is a major, fundamental flaw in the report: It does not mention the words “climate change” or “global warming” at all. Not even once.

This begs the simple question how can a reputable audit company write a report on oil and ignore the consequences of that oil being burnt? It is totally and utterly flawed.

On the one hand we have more and more scientists talking about “unburnable carbon” and how we cannot afford to burn much of the oil we have discovered, let along new dirty oil like the tar sands, and on the other we have the Canadians carrying on as if climate change is not happening.