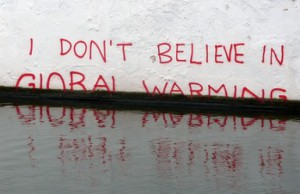 Get ready for the next great climate change bun fight.

In a couple of weeks, the world’s leading scientific experts on global warming, the Intergovernmental Panel on Climate Change (IPCC), will publish their latest vast tome on the defining issue of our time.

Already the climate sceptics and deniers are out in force in an effort to undermine the IPCC’s report, even though some media are reporting that “the panel seems to be bending over backward to be scientifically conservative.”

In the UK, for example, both influential right wing papers, the Daily Mail and Daily Telegraph have written alarmist and factually incorrect articles recently.

The Telegraph even went as far as to warn that global warming has stopped and we are now in an era of “global cooling”.

The Mail’s article was so bad that Greenpeace Head of Media in the UK, Ben Stewart, accused the paper of deliberately cherry-picking evidence in an effort to mislead its readers.

Both articles have been doing the rounds on the denial blogs, with the Mail’s article “buzzing around the denial-o-sphere like a bumble bee on crystal meth”, argues Stewart.

What we know is that we can expect more attacks from the sceptics over the next few weeks as the IPCC’s report is published. The denial-o-sphere will be abuzz with distorted facts and vitriolic attacks against the scientists themselves.

We also need to put the upcoming attacks in an historical context and that is where a new report, written by Greenpeace climate campaigner Cindy Baxter, is really timely.

Baxter is a rare commodity these days. She has worked on the climate debate for decades and studied the climate sceptics with a meticulous passion surpassed by few people on this planet. This is what makes her report so welcome, insightful and powerful.  You know that you will not see it covered in the Daily Mail, or Telegraph.

In her report, Dealing in Doubt, she traces the denial attacks against climate science back to the early nineties to the days of the Global Climate Coalition and Climate Council, which were fossil fuel front groups designed to undermine the UN process.

In their attack on climate science, the sceptics have used a wide range of “dirty tricks: from faked science, attacks on scientists, fake credentials, cherry-picking scientific conclusions: a campaign based on the old tobacco industry mantra: ‘doubt is our product’.”

The report  traces the main funders of the denial machine, from Exxon to the Koch Brothers to the new Darth Vaders of the funders: the Donors Trust & Donors Capital. These two Trusts are designed so that denier funders can hide behind the mask of anonymity, so the rich and powerful can put money into financial trusts which then no one can then trace back to them.

The report also gives special attention to what Baxter terms the “poster child of the climate denial machine’s free market think tanks”, the Heartland Institute, which is about to launch a new version of its “NIPCC” or “climate change reconsidered” report next week in Chicago.

What we do know is that Heartland will be a central conduit for attacks on the IPCC, so will the UK-based Global Warming Policy Foundation, whose founder Lord Lawson has no scientific credentials or credibility at all.

The report finishes by saying that “The individuals, organizations and corporate interests who comprise the ‘climate denial machine’ have caused harm and have slowed our response time.  As a result, we will all ultimately pay a much higher cost as we deal with the impacts, both economic and ecological. Eventually, these interests will be held accountable for their actions.”