This weekend, Oil Change International’s newest campaigner and I joined dozens of dedicated community leaders, climate movement allies and friends, and a couple thousand new friends in a march to the Chevron refinery in Richmond, California. Our demands were simple: Stop polluting our community, wrecking our climate, and buying off our democracy.

Following a rally outside the refinery gates that included speakers ranging from the Mayor of Richmond to local activists demanding an end to Chevron’s toxic legacy, Matt and I joined 200 others in walking onto Chevron’s property and sitting in at their gates in an act of peaceful civil disobedience. Led by Richmond community members, indigenous leaders in the Idle No More movement, and other climate movement leaders, we refused to move until our demands were met or we were arrested. Amidst a beautiful series of chants, camaraderie, and touching moments of solidarity, we were arrested one-by-one for trespassing and released shortly thereafter. 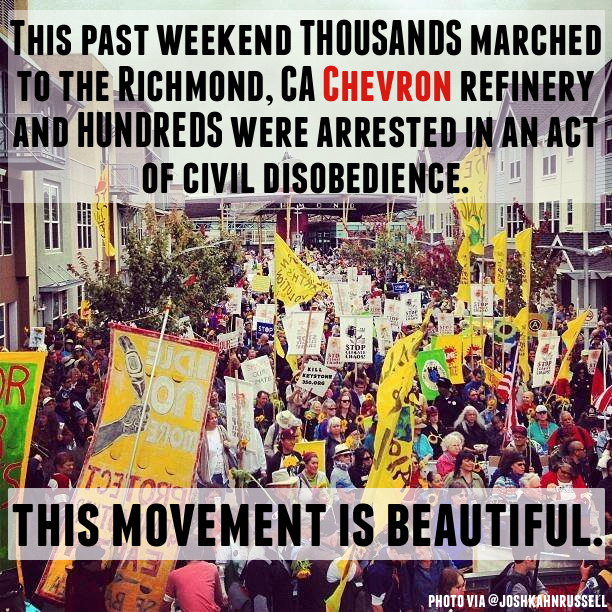 The act of civil disobedience on Saturday in the end carried limited legal consequences, but nevertheless was a show of strength and power that I was honored to be a part of.

Collectively, we showed that we aren’t afraid of sacrificing our freedom to ensure our voices are heard. We showed to Chevron and the rest of the fossil fuel industry, that we won’t be fazed by intimidation as we fight for a safer future. And we showed communities around our country and the world that we stand with them as they struggle against similarly disastrous powers that are threatening their lives and futures.

The action came almost exactly a year after a massive explosion and fire at the Chevron refinery imperiled a huge swath of Richmond and the East Bay, sending 15,000 people to the hospital. In remembrance of that day, participants carried sunflowers, which are known to help with toxic remediation.

Much was written in the lead up and after the event, and the pictures tell a powerful story. But the action left me with two thoughts in particular:

1) This movement is beautiful.

The movement pushing to leave dirty fossil fuels behind and move towards a safer climate is growing ever more diverse by the day, and its creativity never ceases to amaze me. Whether it was the children painting a giant sunflower in the street (with biodegradable paint, of course), the hundreds of gorgeous signs, or the sheer energy of the crowd, this was an event that couldn’t help but inspire. And the amazing thing is that the march in Richmond was just one of so many events going on all around the country seemingly everyday.

It’s hard to believe how we couldn’t win after a day like Saturday. Looking around, there were so many smiles in the crowd, but more importantly you could sense determination too. Every time I’m in a crowd like the one at the gates of Chevron in Richmond I grow even more confident that we are on the winning team. We may be facing some of the most powerful interests in the world, but looking around on Saturday I saw more than enough power and solidarity and determination than we could ever need to take those interests head on.

It’s going to be a long road yet, and there will be many more marches and sit-ins and, sadly, disasters like the Chevron refinery fire ahead of us, but with each day, each arrest, each march, each step, we are that much closer to seeing the movement that will bring about the change that we know is so desperately needed. Saturday was a big step among many this summer.