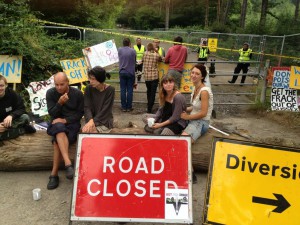 The barricades have been drawn.

On the one side stands one of Britain’s leading unconventional energy companies, Cuadrilla. The company is chaired by the influential former BP chief executive, Lord Browne.

On the other side stands the rural village of Balcombe in the rolling hills of rural Sussex. Balcombe, near the town of Lewes, is a quintessential picture of the English countryside, where you can watch cricket on the village green or have tea and cake in the local tea rooms. It is part of the affluent stockbrocker belt of England.  Many of its residents are traditional Conservative voters.

It is also rapidly becoming the front line in the battle of Britain’s energy future. Cuadrilla has been granted a licence by Sussex Council and the government to undertake exploratory drilling for oil in the village.

The drilling pits the oil company against the vast majority of the local population. In a parish poll taken last year a massive 82 per cent of residents opposed drilling operations on their doorstep. Although the company only have a licence for exploratory drilling for oil, residents fear it will be the first step towards large scale fracking of the surrounding British countryside.

Katie Dunn from Frack-Free Balcombe argues that the exploratory drilling is the first step in whole scale “industrialisation” of the area. Cuadrilla’s holding company has a licence to explore over 57,000 acres.  Fracking, she argues, is inevitable.

Even senior conservatives, such as Peter Lilley, who is on the influential Energy and Climate Change committee, argue that the only way to find out how much shale oil and gas is in the UK is to undertake “substantial” drilling.

The drilling could start as early as tomorrow. But yesterday, local residents and environmentalists blockaded the site, and the protest continues today. Yesterday, they forced a lorry carrying drilling equipment from entering.  After a tense stand-off, local Police ordered the lorry to turn back.

The conflict could escalate as protesters have now pledged to mount a round-the-clock campaign to prevent Cuadrilla from drilling. Local environmental campaigners have joined in the protest too.

Brenda Pollack, regional campaigner for Friends of the Earth South East, said: “Shale gas and oil are not the solution to our energy challenges. They threaten local communities, pollute our atmosphere and there’s plenty of evidence they won’t bring down fuel prices. It’s time to end the nation’s costly addiction to dirty fossil fuels and build a clean future based on energy efficiency and harnessing the power of the wind, waves and sun.”

Cuadrilla, though, argues that Britain needs home produced oil. It also says if it needs to frack it will have to obtain new licenses.

However the problem for the oil industry and the government is that the protests at Balcombe could be replicated across the country. Britain does not have the wide open spaces of America. It is a crowded island, where the proximity of concerned local communities and rampant fracking will turn out to be a toxic mix that could backfire spectacularly for both the Government and the industry.

Because one thing is certain: the more concerned communities find out about the risks of fracking the more they do not like it.